A mostly sure-footed ‘Fiddler’ remains solidly on the roof

Tevye is the sun at the center of the “Fiddler on the Roof” solar system. If he doesn’t flood you with light, gravity and nurturing, all-encompassing warmth, you might as well forget it.

That’s a major reason why CenterStage Clovis Community Theatre’s production works as well as it does. Darren Tharp, a seasoned community-theater actor making his debut as Tevye, often shines in a booming, well crafted performance as theater history’s most famous dairyman.

To Life: A scene from CenterStage Clovis Community Theatre’s production of “Fiddler on the Roof.” Photo / Kyle Lowe

His “If I Were a Rich Man” is a delightful exercise in crisp comic timing. The nostalgic “Sunrise, Sunset” is heartfelt and achingly sung. Director Scott Hancock coaxes emotion and depth from this strong and nuanced actor.

I’m still not convinced that Tharp, who recently turned 40, is quite old enough to dig into Tevye as deeply as he might in the years to come, and he finds it a little harder in the second act to command the stage like he does in the first. But it’s still a notable outing.

Three other aspects of the production, which continues for only four more performances through Saturday, July 22, particularly impress me:

• The minimalist scenic design, by Kris Cadieux, is a very nice touch. (Cadieux actually has two shows running at the same time; he also designed the successful set for the Children’s Musical Theaterworks production of “The Hunchback of Notre Dame.”) Instead of a literal depiction of Tevye’s house along a street scene in Anatevka, Cadieux uses a stark wooden platform that elevates the action a few feet above the stage. He then flies in other minimalist scenic elements, stark in their simplicity, as backdrops: the outline of a house, stylized trees. The aesthetic reminds me of Japanese woodprints.

• The lighting design, by Madi Spate, is terrific. In tandem with Cadieux’s set, it gives the production a polished and professional feel, accentuating both dramatic and light-hearted moments.

• The orchestra, conducted by Peter Van Der Paardt, is in predictably fine form. Many of the tunes in “Fiddler” are old and beloved standards, from “Matchmaker” and “To Life” to “Do You Love Me?,” and the instrumentalists do them justice.

The trials of Tevye — five daughters to eventually marry off as he discovers his traditional Jewish patriarchal authority butting up against the modernizing (and highly discriminatory) Russian state — are so well known that I’ll dispense with any but the sketchiest of plot summaries. Suffice it to say: The eldest daughter falls for a nice but poor Jewish boy. The second oldest picks one who’s a lot more radical. The third embarks on a whole new world of possible hurt for her parents: Her beau is Christian. Ouch.

A non-traditional scenic design: Kris Cadieux’s set is a highlight of the CenterStage Clovis Community Theatre production of “Fiddler on the Roof.” Photo / Kyle Lowe

Threaded through the narrative are themes of generational and female empowerment. Contrary to the joking idea that daughters have always tormented their fathers by acting out, it’s easy to forget that for much of history, gender roles and traditional ways of life remained stubbornly fixed. In the Russia of the early 20th century, things really are changing, quickly, and “Fiddler” conveys that sense of urgency so well.

The three older daughters (Teanca Roussow as Tzeitel, Emily Pofahl as Hodel and Mary Boulton as Chava) are all convincing and nicely sung. The strongest suitor is Caleb Harbin’s genial Perchik, offering strong acting and vocals. Michael Gil, as the tailor Motel, and Jeremy Salas, as the Russian Fyedka, have less of an impact, both needing more stage confidence.

Jennifer Gotten, as Golde, sings with authority, but her character didn’t crackle with the kind of energy and humor — nor world-weary resilience — I associate with Tevye’s long-suffering wife. (Her incessant hand-waving detracts from the performance.) Larry Mattox makes a rousing Lazar Wolf, and Kelly Jones-Scott delivers a spirited Frumah Sarah.

My biggest disappointment in the production is Jessica Massie’s choreography. “Matchmaker” feels too fussy, and “To Life” never builds to the intensity it needs. (I do very much like the opening solo of that number by Connor Barton.) The staging of “Tevye’s Dream” feels lackluster, and the famed Bottle Dance in “The Wedding” doesn’t have a lot of oomph, either.

But there is much to appreciate about the design, direction and attention to detail of the rest of the show. (I can’t forget Heather Randall’s excellent period costumes, which I almost universally like except for the Clovis-style black Western hats worn by the bottle dancers.) Some of the tableaux crafted by Hancock are mini-works of art in themselves.

And then there’s Tharp, who as Tevye finds a wonderful light within. He reminds us why “Fiddler” has endured for more than 50 years. By the time his sun sets, you’re thankful this story continues to be told.

Related story: As CenterStage Clovis Community Theatre’s production of “Fiddler on the Roof” opens, Tevye gets a chance to go shopping for a rich man’s house 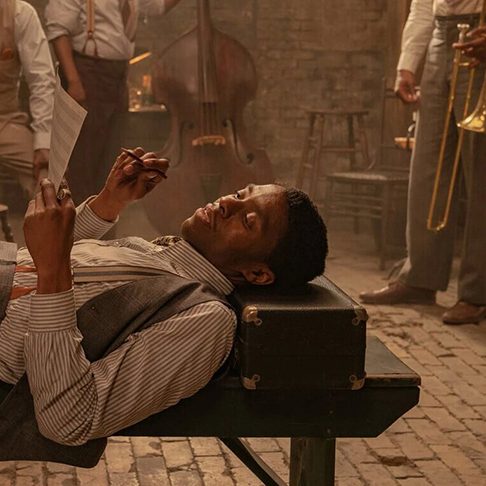 Netflix’s ‘Ma Rainey’s Black Bottom’: Does it capture the brilliance of the stage production?

Review: Audra McDonald wows in live performance, even on Zoom