Arte Américas has a lot to celebrate this month. On Sept. 30, the cultural arts center marks its 30th anniversary with a big bash. And it’s nearing the end of a successful run of “South of the Grapevine,” the second annual exhibition featuring well-known Southern California artists.

One of those artists is Sergio Teran, who will be honored at an artist’s reception at Arte noon-3 p.m. Saturday, Sept. 2. (He’ll give a lecture at 1 p.m. followed by a gallery tour of his show.) Teran is particularly known for his lucha-libre mask motifs and his examination of bicultural identity.

Teran shares the exhibition with fellow artist Rick Ortega. “The two create strong works that excite the eye and engage the soul,” says Arte executive director and exhibition curator Frank Delgado. “The colors of their palettes are bright and distinctly Latino — and their content is beautifully executed and filled with deep narrative.”

I caught up with Teran via email to talk about “South of the Grapevine.”

Q: How many works are in the show? Are all considered mixed media?

A: I have 14 works in the show. They are paintings, prints and a mixed-media drawings. “Popi Love” is done in just oil paint on panel. But most all of my work employs multiple media on one surface.

Q: You had three large-scale works in the first “South of the Grapevine” exhibition at Arte Americas in 2016. Was that your first connection to Arte? How did you end up here with a full-scale show in 2017?

A: My first connection to Arte was through the director of Avenue 50 studio in SoCal, Kathy Gallegos. She contacted me and said the director of Arte in Fresno was putting a show together of artist from Southern CA. Are you interested? I had been working with Kathy for several years and she has always introduced me and or linked me up with good people/serious people.

I talked with Frank Delgado soon after and we hit it off. The works that Frank borrowed that year were my “Saints of Abrassle” portraits from 2006-2008. And I did another group show with Arte before the current show.

Q: Tell us just a little about your background, both as a resident of L.A. and as an artist.

I am a Mexican/American artist born 1974 in SoCal. I grew up in a suburb of East Los Angeles. My parents were both Spanish speaking. My father was bilingual. Both were working-class and made money working with their hands.

In 1995 I attended the Art Center College of Design where I received a Bachelor of Fine Art. In 2000, I moved to New York City to attend graduate school at NYU where I received a Master of Arts in 2002. I stuck around the East coast for about 7 years.

Q: Delgado says you have a philosophy that anything you paint “is an illusion.” How was that a springboard into your artwork for the show?

A: Frank had asked me why the works are so textural, and I explained to him that the image is just an illusion. However the material is very real. I improvise a lot of my process, but there are many layers. Some textured, some painterly, and some loose and abstract. To me, there are no boundaries in painting. Consequently this allows for more options in material and experimentation, which, for me, makes content visceral and present.

Q: Your uncles were Mexican lucha libre wrestlers. What was that like for you as a kid? Did you get to go to their matches?

My uncle (my father’s older brother) wrestled on the Los Angeles and Tijuana circuit in the 1970s and ’80s. He was known as Jack El Destripador, (Jack the Ripper) and was also in a tag team called “Los Migra.” On my mother’s side of the family, My Tío Rodolpho Gonzales was Blue Scorpio during the ’60s and ’70s and wrestled in Arena Mexico, with the likes of El Santo and Huracán Ramírez, to name a few.

I can’t recall seeing my uncles wrestle live. I was too young — but my brother did. He recalls, during a match in the 1970s, at a moment when my uncle was losing, my brother (who must have been 5 years old) was told to walk up ringside and hand his uncle a cup of ice. My uncle, who was a “Rudo,” proceeded to use the ice as a weapon to spit in the eyes of his opponent. He said, “I remember the crowd booing me as I walked back to where our old man was laughing at the whole thing.”

Q: In a post on theculturetrip.com, writer Michael Reyes notes in talking about your work that wearing a mask can be transformative. He writes: “The enmascarado, as associated with lucha libre in LA, has become Mexican American mythology. To many lucha libre fans, the masked person tells a story of both a bicultural person and warrior against societal boundaries.” What are your thoughts on this?

A: Growing up in the States, I find that U.S. history and politics are apathetic to the brown-skinned immigrant.

The immigrant and the Mexican wrestler is one and the same for me. In my own work the mask has been a symbol of identity or the lack thereof. In Mexico the “masked man” is a heroic icon like “El Santo” or Comandante Marcos. In the American mainstream the immigrant is ignored as if they don’t exist. In Mexico I am considered American and in America I am Mexican. The use of the mask is meant to evoke the spiritual being from within the subject while yet retaining their ordinary, human identities, similar to what would happen in cultural ceremonies that involve spirit masks or puppetry. It empowers.

Q: You call yourself a storyteller. Your work “Jardine Del Diablo” seems to tell quite a story: It looks like it’s set in a southern California backyard, with two boys — one wearing what looks like a Dia de los Muertos skeleton costume and the other in a lucha libre mask, both standing next to an oversized black dog — in the foreground. In the background a pink male figure, who looks like another wrestler, carries a suitcase (or perhaps a floor fan, or some other boxy item) as he slinks across the yard. First off, do you mind when the viewer gets quite literal when describing one of your works, as I’ve just done? Does it irritate you at all if someone interprets something differently than what you were going for?

A: It does not irritate me, because I am the author of the work, which means the truth of the piece stays with me. Although I think that art can be objective, people will often find their own meaning in the work; that’s ok. In my work ambiguity co-exists with realism. I like the balance of the two.

Q: That said, what story does “Jardine Del Diablo” tell?

A: The spirit of this work comes from a cultural belief in the metaphysical, and its parallels to reality, Mexican folklore and the stories that are told to children to keep them from staying out too late, especially during “Santa Ana winds.” They are the Devil winds and they spread fire and bring with them mischief, hence the Devil with the box fan.

Q: Before you showed your work in Fresno, did you know anything about the art scene here? Is Latino art in the Central Valley different than it is in L.A.?

A: I believe your immediate environment will inform the kind of work you do. I did not know a whole lot about Fresno. I knew it was a largely Latino city …so we share a history and a connection in that way but our Chicano-history and the challenges are slightly different. These are things that influences and interest my art.

Though I have never visited I know the landscape of Fresno is very different to that of Los Angeles there is lots more concrete than nature in L.A. We are segregated and currently affected by gentrification and displacement. The works I saw in “North of the Grapevine” had yellows and ochre with muted blue skies. 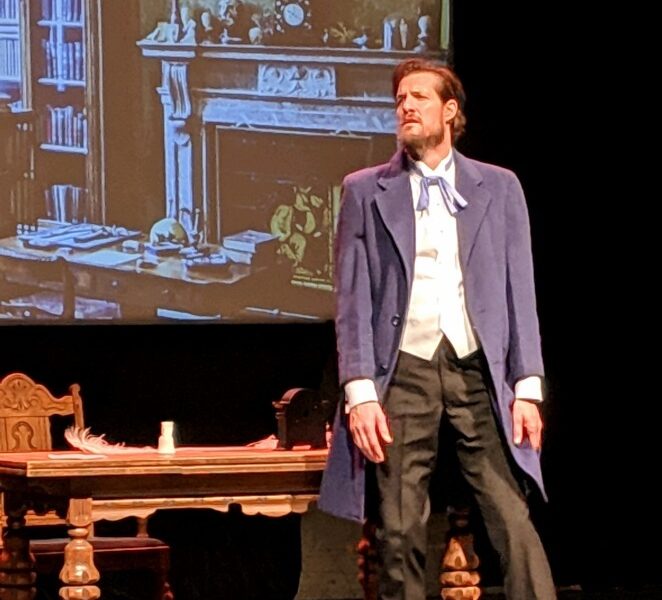 The List: From ‘Traviata’ and ‘Madama Butterfly’ to Clovis cabaret, some promising picks for the weekend