In a must-see show, Brad Myers gives his weightiest performance yet

You hear Brad Myers in “The Whale” before you see him. The wheezing from the darkened stage is alarming and disorienting, like in the middle of the night when you wake from a deep sleep to hear one of your kids throwing up. As the lights slowly rise, we begin to focus on the source of this unhealthy sound. That’s when we first see Charlie, a troubled man. He thinks he could weigh 600 pounds, though it’s been years since he’s been able to get on a scale to know for sure. In a culture in which obesity seems ever more common, Charlie’s physical condition is still enough to alarm.

In Fresno City College’s fine production of Samuel D. Hunter’s play, which ran off Broadway in 2012, Myers — a Fresno State theater professor appearing in this production as a guest actor — gives a performance as Charlie that is revelatory. It’s a terrific, mesmerizing and deeply affecting piece of work.

You might be tempted to attribute my over-the-top praise to something similar to the Oscar “disability effect,” in which actors playing characters with physical or mental disabilities — often gut-wrenching roles involving extensive makeup or prosthetics — have an edge in terms of critical acclaim. Yes, perhaps that is a factor. But at its core, Myers’ performance seems so much more than a couple of hours in a fat suit. (And what a well designed fat suit it is, thanks to Debra Erven). With limited mobility other than from the neck up, he relies almost exclusively on his voice and eyes to make the character work.

In “The Whale,” whose title is a nod to the obvious and also the literary — Melville’s “Moby Dick” is a recurring motif — Charlie is a housebound recluse living in a small Idaho town who supports himself as an online writing instructor. His dwelling is a dump, with years of accumulated detritus and dirty dishes clogging nearly every surface. (Christina McCollam-Martinez’s set has a distinctly closed-in feel, with no windows, almost like a coffin.) His only brush with the outside world is a stalwart friend and nurse, Liz (Aleah Muniz), who brings his food and keeps an eye on his rapidly deteriorating health. The diagnosis is congestive heart failure, and if he doesn’t get to a hospital soon, the prognosis is grim. He’s eating himself to death.

Claudio Laso, left, and Aleah Muniz in a scene from “The Whale.” Photo / Fresno City College

There would be no play — no story of Charlie — without a break in his routine, and as the words “Monday morning” flash above the stage, it’s clear that we’re in for a consequential week. Two unlikely visitors drop by. The first, a Mormon missionary (Claudio Laso, alternating the role with Joshua Plowman), has a weird vibe about him. The other is Charlie’s estranged teenage daughter, Ellie (Cat Evangelho), whom he hasn’t seen since she was tiny. They each end up having a profound impact on Charlie.

Through it all there are mysteries to solve and motivations to decipher. Why does Charlie hate the Mormon church? Why is Liz so loyal to him? Themes of religion, homosexuality and acceptance dominate.

Director Charles Erven keeps the action surprisingly chipper and mobile, even with a mostly immobile leading character, and the often emotionally intense short scenes seem to fly by. He elicits some fine performances from his supporting actors. I was particularly impressed by Laso, who brings a low-key, naturalistic charm to his missionary character, but also a slowly expanding sense of vulnerability and unease. Bridget Manders Martin, in a striking performance as Mary, Charlie’s ex-wife, is superb. (There’s a moment when her character describes a pivotal encounter in a parking lot that brought tears to my eyes.)

Hunter’s script offers a rich and textured characterization of Charlie. But the playwright falters when it comes to the daughter. Ellie is supposed to be a hurting, rebellious teen, but her relentless, one-note awfulness makes it hard to take her seriously. The character strays close to caricature, and Evangelho struggles to connect. The friend/nurse role is a little more nuanced, and Muniz has some nice moments, but there’s still a stilted, impenetrable aspect to Liz.

Still, those writing flaws don’t distract very much from Myers and his must-see performance. One thing that made me realize how beautifully he inhabits this role is my response to a plot point late in the show regarding Charlie’s career as a teacher. The revelation didn’t have anything to do with obesity or dying or devastating family secrets, but it was an emotional wallop for me. And it had to do with Charlie as a person, not an object of pity or spectacle. (And certainly nothing to do with an actor playing a plum role in a fat suit.) In “The Whale,” Myers connects with Charlie in a way that made the character real to me — so real that it made a sudden shock of bad news actually painful. That’s what you call making a splash in the theater. 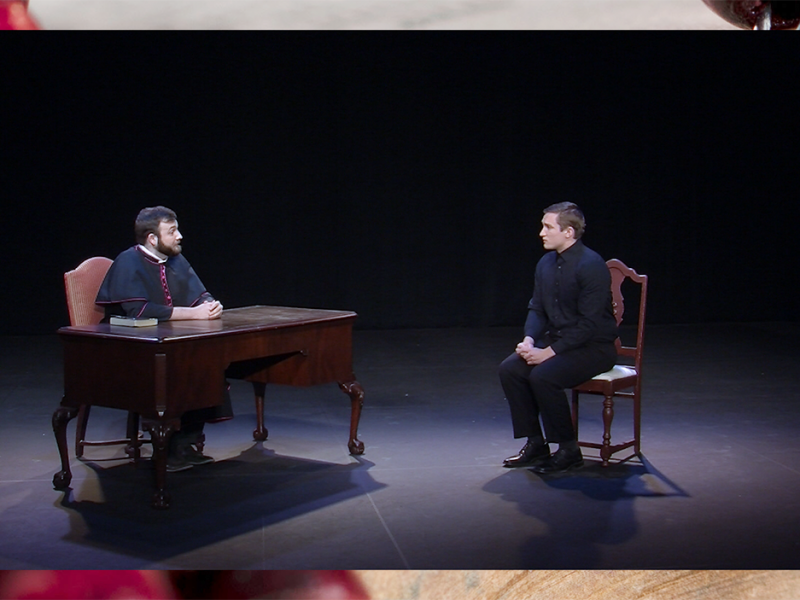 Review: Fresno State’s ‘To Thine Own Self’ rings true by reimagining Shakespeare