The goulash. The fresco-slathered ceiling of the Bucharest concert hall. The staggering heap of beat-up luggage in Auschwitz left behind by a fraction of those who lost their lives in that place of human-soul darkness. The $30 prime orchestra seats to the ridiculously good opera in Prague. The strange sight of dozens of Communist-era busts and statues exiled to an outdoor museum display in Sofia, Bulgaria. The spectacle of “Snow White and the Seven Dwarfs,” family-ballet-style, in Budapest. The kitschy appeal of Casa Vlad Dracula, a restaurant in the Transylvanian village where the world’s most famous “vampire” was supposedly born. The sweeping hilltop views of Veliko Tarnovo, once the capital of an 800-year-old nation. The cathedrals, the pastries, the 2 a.m. passport checks on the overnight trains, the monumental socialist-age buildings, the vibrant contemporary art. The jet lag.

At the Museum of Socialist Art in Sofia, Bulgaria, prominent statues and busts from around the country were rounded up and plopped into an urban patch of grass. Photo / The Munro Review

Did I mention the goulash?

I’m back from a riveting trip to Eastern Europe, and I can’t wait to write about my adventures in detail over the coming weeks and months.

But for now, I’m excited to jump back into the Fresno-area cultural scene. There’s much to fill you in on. I want to catch up on events I missed, update you on ongoing stories and preview exciting things to come. Plus, I have big plans for the summer that include the (at-long-last) unveiling of my redesigned site and new voluntary membership structure.

I was gone for the taping of the June episode of “The Munro Review” (my monthly CMAC arts talk show), but the show went on — thanks to guest host (and ferocious local arts advocate) Jackie Ryle. She and producers Kyle Lowe and Lisa Talley, along with the hard-working volunteer CMAC crew, make it a crisp, lively episode. Thanks, also, to guests Bruce Kalkowski and Doug Hansen, who talk about Doug’s new exhibition at 1821 Gallery & Studios (it continues through June 30); and Michele Ellis Pracy, who fills us in on new developments at the Fresno Art Museum. Here’s the episode:

And I’d like to once again express my appreciation to Doug Hoagland, who stepped in to cover one of the biggest cultural events of the year: Audra McDonald’s homecoming concert. Thanks, Doug, for capturing the excitement and virtuosity of this event. Though I was halfway around the world, I still felt that Fresno pride!

I missed one big theater opening while I was gone: Good Company’s “Joseph and the Amazing Technicolor Dreamcoat” at Roger Rocka’s. I plan to see it this weekend and have a review soon.

This weekend, Woodward Shakespeare Festival on Thursday opens its first production of the season, “Othello.” (Opening night performance is 8 p.m., and I’ll be posting a preview later this afternoon.) And the big-deal FOOSA Festival at Fresno State, featuring gung-ho classical-music students and their world-class teachers, will offer two local concerts (plus one at Disney Concert Hall in Los Angeles). More to come on that as well.

I’m planning to attend the second weekend of an intriguing sounding production at the VISTA Theater: “Circle Mirror Transformation,” directed by Kate McKnight.

And I’ll update you on the Fresno for Parks (and arts) initiative signature-gathering campaign, which is heading into the home stretch. Fingers crossed!

My apologies for anything I missed while I was gone. Even a one-person show has to take a break now and then.

In the meantime, I’m going to defeat my jet lag. Or take a nap. Encourage me to make the right decision.

How did Memorial Auditorium get dragged into the Tower Theatre controversy? 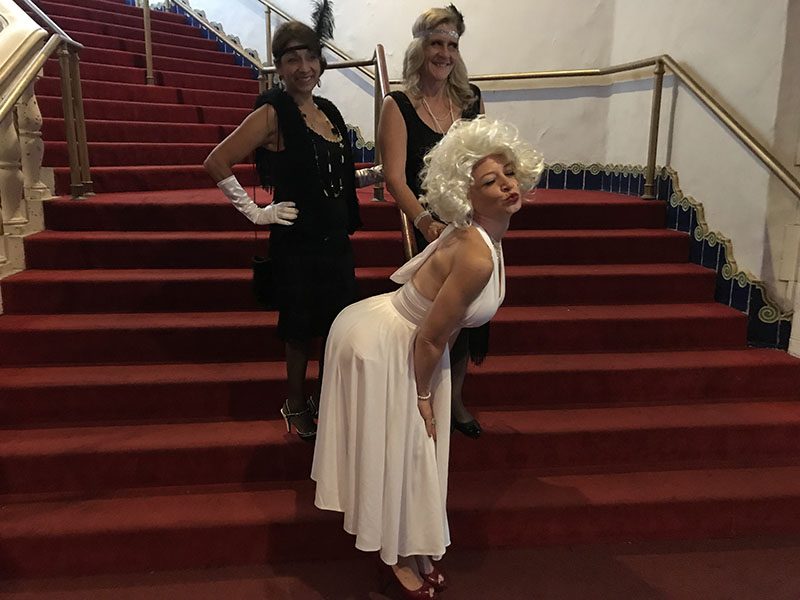 Just think: Warnors could have been turned into a parking lot. Happy 90th birthday!