What’s in store for April ArtHop? The monthly open house of galleries and studios in the downtown and Tower District neighborhoods includes some great sounding shows. Here are five suggestions for filling your evening on Thursday, April 4. (Most venues are open 5-8 p.m.; for a complete rundown, go to the Fresno Arts Council’s updated list.)

The day after the 2016 election, a despondent Marilyn Prescott took a walk with her dog. They saw a dead bird.

She took a photo, then went back to her studio and painted it.

“I just began to think it was emblematic of what had happened to our nation,” she says.

The series of 22 new paintings “lacks subtlety,” the artist says, and that’s exactly how she wants it. She describes the show as depicting her “deep despair over the state of the nation and global culture.”

Pictured above: Marilyn Prescott’s ‘The Fallout.’

After that first dead bird, she began to focus her attention on other dead birds she found.

“There’s nothing more evocative than a dead bird,” she says. “Who doesn’t get sad about that?”

She had long been concerned about climate change. The birds captured the angst she felt. She began to combine those with figurative images. Prescott’s fellow artist Juliana Harris wrote a description of the show for the press release:

If paintings could scream, one might hear the unsentimental cacophony of life and death as birds decay alone, on a sidewalk. Fires rage. Roots are exposed. Female figures, some pregnant, witness the world collapse with heart-wrenching consequences. White ghosts descend freeze- frame through the picture plane. Indifference and agony aside, Prescott offers glimmers of hope pointing toward life’s regenerative powers and stubborn refusal to succumb to annihilation.

Prescott wasn’t this gloomy in her last show, “Nature and Memory.” (She describes that body of work as “happy art.”) A full-time artist since 1991, she is a transplant from Orange County and has been a member of Fig Tree since 2013.

Art that is angry and bleak is a tough sell — both in the financial sense of the word, but also in terms of creating a bond with the viewer. But Prescott felt compelled to do it. It’s a reminder that life isn’t always a walk in the park.

A work by Valerie Runningwolf.

Valerie Runningwolf is featured artist for April at Vernissage. Her exhibition is titled “Beneath the Mask.” She tells me: “The show is about we often wear masks and show the world a different face than who we truly are.”

From her artist statement:

The most valued art education I received has been from working with children who have taught me to be honest, brave and bold. To be able to express through art without fear or judgement. I am native to California and reside in the Central Valley.  It is through art I found spiritual healing and within my art I share a reverence for the life force which connects all beings.

Runningwolf graduated from San Jose State with a bachelor’s degree in art and graduate studies in art and education.

The show runs through April 26.

Are you looking for a visual thrill in your ArtHop experience? At First Presbyterian Church, you can engage in an interactive gallery experience with fluorescent blacklight and 3D effects incorporated into each artwork that allow the viewer to alter the experience.

One of the biggest and most prestigious juried shows of the year is the Fresno Arts Council’s annual Arts Alive in Agriculture exhibition at Fresno City Hall. Now in its sixth year, the show honors “the admirable attributes of our community tradition and resources.”

Michael Garcia’s ‘If You See the Buddha Kill the Buddha.’

Never pass up a chance to see a new show by Michael Garcia, who returns to 1821 Gallery & Studios. Here’s a description from the gallery:

Garcia will be showing 11 new pieces. He creates richly textured works on panels with a process that involves building up layers of paint then tearing them down by scraping, sanding, burning, to reveal a surface that has the abused and weathered quality of an object damaged by time. Garcia’s work reflects his immersion in Japanese culture and aesthetic, from ten years spent living and working in Japan.

The show opens for ArtHop, and you can swing by later for “Not Hop,” featuring music, which runs 8-10 p.m. An artist’s reception for Garcia is 3-7 p.m. Saturday, April 6. 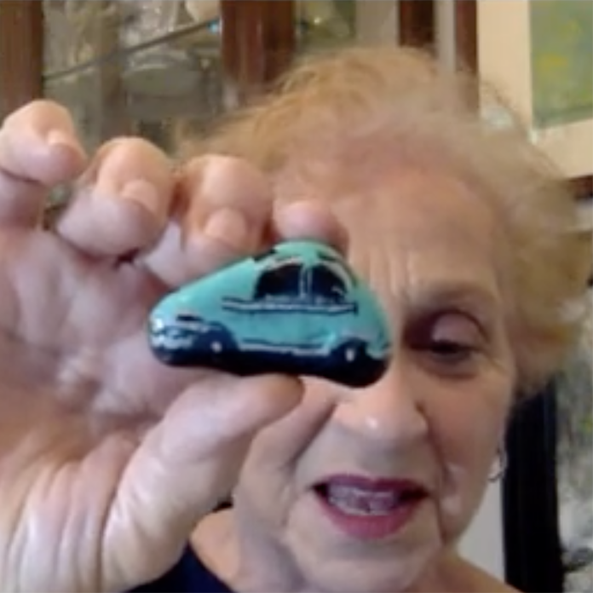 At San Joaquin Gardens, a rock can become a canvas — and a treasure