Wendy Denton and Jennifer Moss knew that women artists wanted to share their work even during the pandemic. That’s how “Visions of Self,” a juried online exhibition sponsored by Yosemite Sierra Artists, came to be. It debuted earlier in March for Women’s History Month and will remain online at YosemiteArts.com for an extended run. (Yet another advantage to the digital world — a show can hang around forever if people want it to.)

Pictured above: Gabriella Dellosso won Best in Show in ‘Visions of Self’ for ‘Homage to Evelyn De Morgan.’

The artists: Of the 117 featured artists, about half are from California. The rest are from the rest of the country and nine other countries: France, India, Australia, Canada, Germany, Poland, Russian Federation, Belgium, and Israel. Media represented include: photography, oil, acrylic, and watercolor painting, sketching, charcoals, multimedia, sculpture, and printmaking.

The co-creators: Denton and Moss are members of Yosemite Sierra Artists (formerly Yosemite Western Artists), which was founded in 1971. They created the Women’s Voices, Women’s Vision group. “Visions of Self” is the first exhibition.

Why they founded the group: “It was formed to give women artists the opportunity to have a safe, supportive e-art-centric space to meet and discuss art ideas, works in process, and finished works,” Denton says. “It is an art group for all who identify as female, independent of location.” The goal is to “lift and support each other’s work, to explore our world and our lives at a deeper level through art in all media.”

Best in Show winner: Gabriela Dellosso has been on a decade-long journey of painting herself into homages to women artists, celebrating female artists throughout the ages. Her winning entry, “Homage to Evelyn De Morgan,” will be featured at Sotheby’s in New York and then an exhibit in Barcelona.

First Place winner: Brianna Hunt’s photo “Self-Portrait #7” depicts the rage of the Black woman with her iconic braids covering her mouth as if to censor her thoughts.

Second Place winner: Hannah Turner’s “Depression” depicts the dichotomy of the emotions of internal life vs the presence we feel we need to put out in the world.

Why people should make a special effort to support women artists: Denton has three good reasons. She explains:

It refutes the notion of women’s artistic inferiority. Looking at art through the lens of the gender of the creator matters, particularly because there has been a lot of nonsense about whether women are “able” to make good art, or that their hands are too weak to hold brushes properly (really). Even Aristotle declared that creativity was innately male, and that women possessed deformed or inferior bodies to men and simply weren’t capable of making art.

It chips away at sexism in the art world. This isn’t a little problem. The National Museum of Women in the Arts reports that over half of master’s in fine arts degrees are earned by women, though fewer than a quarter of women have shows in important galleries. (Thanks to JR Thorpe for her research.)

It legitimizes the female perspective. For centuries art by women has suffered from not only being seen as “less good” but also less worthy of serious attention. Not important. Not significant. Doesn’t matter.

Are there plans for another exhibition? “Absolutely,” Denton says. There will be an annual show with the same theme: “Visions of Self.” There may be an additional show in the fall. The group meets at 3 p.m. the first Sunday of the month. All women artists are welcome. 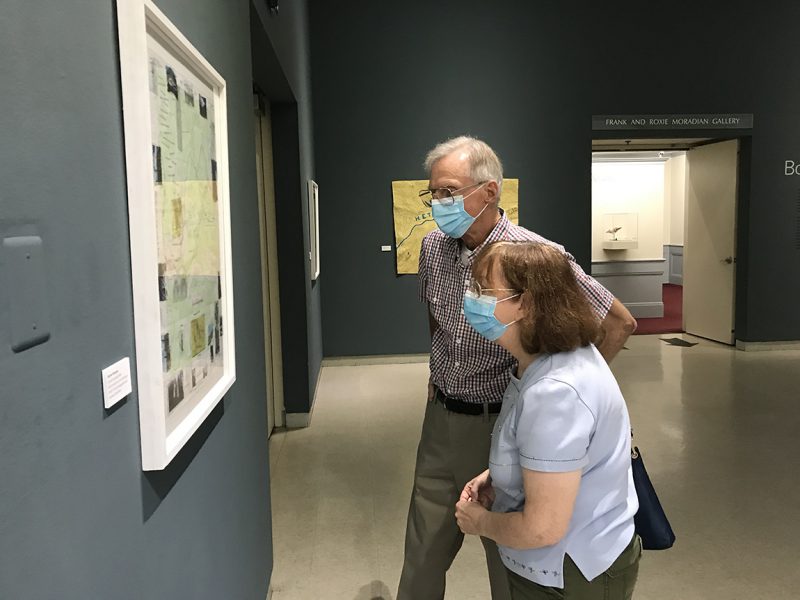 Fresno Art Museum reopens to members on Saturday and to the general public on Aug. 11

With Trump’s signature, $15 billion in relief for entertainment and the arts becomes a reality. How will it impact Fresno?

With county moving back into Purple Tier, Fresno Art Museum once again closes its doors