EJ Hinojosa was on the treadmill one day when he got an idea: How about putting together a concert series highlighting the work of local classical composers? He was listening at the time, he remembers, to “Elgar’s magnificent orchestration of ‘Jerusalem’ ” by Hubert Parry.

“You know, standard gym listening,” he says with a laugh.

It takes a healthy amount of self-confidence and verve to sit down and organize from scratch a big event such as “Composer Showcase,” which debuts Saturday, July 15, at Community United Church of Christ. Especially one featuring a pick-up 16-piece choir. But those in the Fresno-area music community know that Hinojosa, music director at the church and a recent Fresno Pacific University graduate, has tremendous enthusiasm for the local music scene. He is passionate about turning the central San Joaquin Valley into a musical epicenter — and, in particular, encouraging younger musicians to stick around.

Plus, in addition to his day job and his new gig as concert promoter, he’s a new father. Did I mention he’s energetic?

I caught up with Hinojosa via email to talk about the showcase and his dreams for the future.

Q: Do you get the sense that this a particularly fertile time for composing in the Fresno area?

A: I think so. There are already a number of people writing music at a high level in this area. Kevin Memley, Mike Dana, Kenneth Froehlich, Benjamine Boone and Walter Saul all come to mind, among lots of others. Walter cut a record on Naxos last year with Maestro Kuchar and the National Symphony Orchestra of the Ukraine. Even more exciting is that Maestra Rei Hotoda has programmed a new work by Ken Froehlich for her inaugural season with the Fresno Philharmonic. That’s a win for Fresno’s aspiring composers—it sends the message that they can find success in their own community. And there are other really excellent musical groups in town (like Impetus, Soli Deo Gloria, the Emerald Duo) that have made it a point to commission new works from Valley composers. Maybe Fresno can’t support the weight of one hundred people writing music, but if musical leaders in town continue efforts to engage local composers, who knows?

Q: You feature four composers in the concert. Can you give us a brief rundown?

A: Kevin Memley has been music minister of Kingsburg Community Church since 2009. He is an internationally published choral composer and pianist with over 60 titles in print. He has also served 28 years teaching music in public schools. He lives in Fresno with his wife, Melody, and three boys.

Matthew Wheeler, born and raised in Fresno is a professional composer/arranger, orchestrator and musical director. He has studied music at Fresno City College, Fresno Pacific under Saul and Fresno State under Froelich and Boone. He holds an AA degree in Piano Performance and a BA in Music Composition. Matthew’s music has been commissioned by ensembles throughout the U.S. and around the world. Recently, the Youth Orchestras of Fresno premiered his Orchestral Suite based on the work of William Saroyan. Matthew also enjoys composing music for TV, film and video games as well as the theater stage.

Maxton Vieira is a recent graduate of Fresno Pacific University, holding a BA in Music Education with a double major in History. A skilled violinist, he currently serves as a Music Educator and Orchestra Conductor at Mount Whitney High School in Visalia. He plays regularly with the Tulare County Symphony under Bruce Kiesling. Notable among his composition projects is the score for Jeffrey Prosser’s film Birthday in a Dark Room, which will be featured at numerous indie film festivals this summer.

Q: And then there’s you, right?

A: I’m a music educator and composer. I’m a piano instructor at Roosevelt School of the Arts and have served as music director at Community United Church of Christ for four years. I’ve written for ensembles throughout the U.S. and Canada. I live in Fresno with my wife, Erin, and daughter, Rosalind.

Q: How did you pick the composers and program?

A: I thought of Matt first. He’s had a great year as a composer with numerous commissions from Fresno-based groups like Impetus Percussion and Youth Orchestras of Fresno. We worked together at Roosevelt School of the Arts, where I had the opportunity to hear “Illuminate,” which was his only choral composition at that time. It’s beautiful. I believe he’ll make a mark on choral music in California in the coming years. Maxton and I went to school together at FPU where I was impressed time and again buy his talent and work ethic. He’s mostly composed for strings and piano but he was down to write a couple of pieces for this event. Kevin, of course, is among Fresno’s most successful composers. His choral music is among the best loved contemporary literature in the field today. Maxton, Matt and I are really lucky to work with Kevin, but he has never made us feel that way — Kevin is really an unassuming guy with a lot of heart and a wonderful family.

Q: Talk a little about the logistics of getting together a volunteer choir of this caliber.

A: It was a lot of work. Lots of emails and phone calls. We didn’t get everyone we wanted but we did get most of them. We aimed for a 24-voice choir and in the end we assembled a mighty team of 16 musicians. Highest on our list of priorities was an ability to sing music on sight. There are only five rehearsals (15 hours in total) and so musical literacy is a valuable skill in this case. Best of all, all of the singers possess a positive attitude and a collaborative spirit. We’re incredibly lucky to have signed them on to the project.

Q: Pick one piece on the program and talk about it in depth.

A: I’m really excited about “Illuminate.” Matt wrote the piece six years after the death of his father, to whom the work is dedicated. The text is in the voice of the grieving person and gradually shifts focus from grief to hope. The music reflects this transition—as the text moves from “the shadows” to the “Lux Aeterna” (perpetual light), the choral harmonies move from thin textures to rich harmonies. There are three key changes in the piece which Matthew refers to as “lifts”. The primary message of the music is that hope will overcome grief. Matthew told me that he intended the words to be relatable to people of all spiritual inclinations. It’s a truly gorgeous piece with a wonderful variety of textures and a stunning a cappella section in the middle. I think it will be an audience favorite.

Q: Give us a pitch for why it’s important for people to support new and original music.

A: It’s important that people engage and participate in the currents of culture, and music is a core component of culture. But really (and I don’t mean to be smart here), it’s important that people support new music if they want to hear new music. Classical music is alive, and it’s happening in Fresno all the time. If you love Fresno, and you want to see it reach its potential, then you have to support a well-rounded culture here. That means rewarding home-grown creativity and creating a community where artists want to work and live.

Q: Plans for the future?

A: This project is something of a test. If it’s a success I intend to continue. The details are unknown now but generally I see two possible models for the future. One scenario is the choir becomes a permanent ensemble whose primary goal is to commission new music by Valley composers but this means the commissions would always be for choral music only. Another scenario sees the Composer Showcase becoming a New Music series with each concert featuring a different musical configuration (piano trio, string quartet, wind quintet, etc.). I’m more attracted to this model because it would encompass a fuller range of musical possibilities. In either case, the mission is new music and paid gigs for local artists.

Q: Do you always get all your good ideas on the treadmill?

A: Haha! Some but not all. And in fact, I try to say things as trite as “it came to me while running on the treadmill” as infrequently as possible. It was a great moment though.

A: Fresno has all the makings of a musical epicenter. It hosts a robust field of philanthropy and an active institutional/organizational scene. But most importantly this town is home to hundreds of highly-skilled musicians who are hard-working, motivated, and hungry for gigs. They would prefer to find success in their own community, rather than relocating to an unaffordable metropolis where there is little room for another personal brand. Commission Fresno’s composers to write new music, pay them for it, and pay Fresno musicians to play that music, and you will find that here, in the heart of the hot, hard San Joaquin Valley, we’ve got an identity all our own, and we’re ready to make a mark with it. We’re ready to be on the cutting edge. 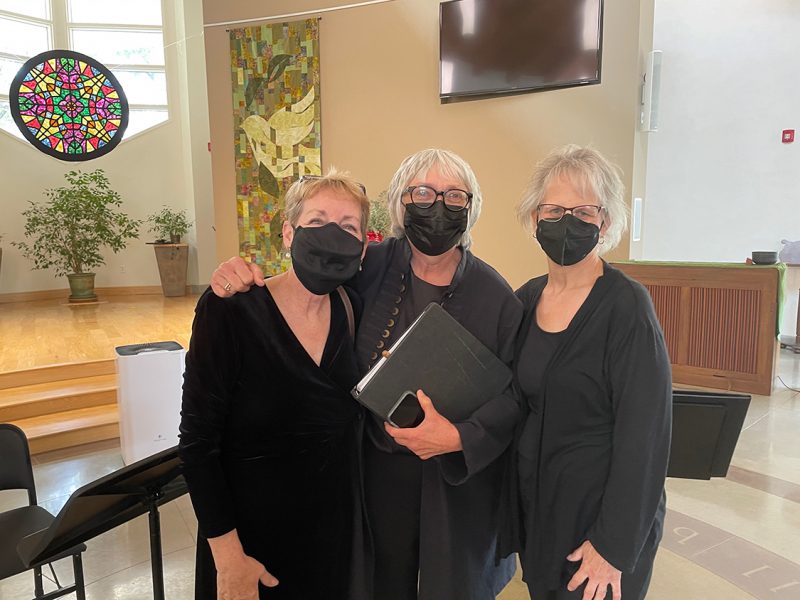