From boozed-up Shakespeare to autocorrect hell, my picks for the 2018 Rogue Festival

Every year it happens without fail as I’m perusing the Rogue Festival program: A show leaps out and screams, “Come see me!” What kind of act am I drawn to? You might think that because I often go to the symphony and opera that I’d only be drawn to the highfalutin events. Not true. My No. 1 show to see at the 2018 Rogue … drum roll, please … is:

“S’Will,” a theater piece that its producers describe as a “blending of Shakespearean text, modern pop culture, and copious amounts of alcohol.”

Fresno’s very own fringe festival kicks off Friday, March 2, at various venues in the Tower District. As a longtime audience veteran, I look forward to it every year. The following list of five picks is based on nothing more than my own hunches. Who knows? I could be recommending acts that are terrible. But that’s kind of the fun of Rogue: There’s a sense of travelling mostly blind in unchartered waters. You might discover the Northwest Passage, or you might sail off the edge of the world.

As always, best bet is to check the Rogue website (fresnoroguefestival.com) to confirm venues, times and ticket prices, and also to learn about Rogue basics, such as the $3 wristband you need (a one-time purchase) to get into all shows. And it doesn’t hurt to check the Rogue’s news and updates page, because cancellations do happen occasionally.

“S’Will,” performed by The Fools Collaborative, of Fresno.

The premise: A slimmed down version of Shakespeare’s “Twelfth Night” will be performed by six actors. Prior to each performance, one actor in the cast will randomly be chosen an hour before curtain as that evening’s drunken fool. He or she will be required to ‘swill’ alcohol until showtime, then perform while intoxicated.

Why it’s on my list: Mostly because it’s a mighty fine cast. I’d pretty much see anything starring local theater veterans Casey Ballard, Kristin Crase, Miguel Gastelum, Camille Gaston, Randall Kohlruss and Haley White — whether they were drunk or sober. And the premise appeals to my sense of Shakespeare for the Groundlings, not the donor classes. My one fear is that alcohol tolerance among this worldly cast will be so high that we won’t be able to tell a difference. Should there be a Breathalyzer on the premises?

Details: The Fools had originally planned to perform as part of “Underground Rogue” in someone’s backyard, a new Bring Your Own Venue component to this year’s festival. But first-weekend rain has prompted a move to The Painted Table, 1211 N. Wishon Ave. The second weekend is scheduled for “The Stargazer Lounge” (aka that backyard belonging to one of the drunken Shakespearean players), 1292 N. Ferger Ave. Performances are 8:45 p.m. Friday, March 2; 7:30 p.m. Saturday, March 3; 6 p.m. Thursday, March 8; 7:15 p.m. Friday, March 9; and 8:45 p.m. Saturday, March 10. Tickets are $10.

“Bursting into Flames,” performed by Martin Dockery, of Brooklyn, N.Y.

The premise: This one-person show is the story of one man’s “gonzo romp through the afterlife.”

Why it’s on my list: It’s because of the sheer talent of Dockery, who can grab an audience by whatever body part you think most aptly completes this metaphor, then keep them transfixed for the duration of the performance. I’ve seen this Rogue veteran three times now, and even when his show didn’t work for me (one time out of those three), it still was powerful stuff. Dockery is a master storyteller who is adept at weaving concrete details into larger intellectual and emotional throughlines.

The premise: This wacky take on a Garrison Keillor radio show (minus the sexual harassment, presumably) is back with “amazing musical acts, silly sound effects, wacky commercials, drama and more!”

Why it’s on my list: The original “Flower Tome Companion” was a big Rogue hit — and even went on to sell out the Tower Theatre in a later charity performance. Besides, anyone who can use “wine” as an atrocious pun deserves every beer that comes his way.

“Frankly, Autocorrect, I’m Getting Tired of Your Shirt,” performed by Jayne Day and Renee Newlove, of Fresno.

The premise: Welcome to autocorrect hell. We’ve all been there. Example: Your entire family showed up on the doorstep, sobbing uncontrollably, and yelling at you for texting “LOL” about Grandma being cold in the grave. Two hours later, they finally stop yelling and crying long enough for you to tell them you typed “GARAGE.”

Why it’s on my list: Sometimes it’s all about the headline in the program. Well, that and my view that if I were trapped with the performers for an extended period of time in an elevator I’d risk laughing so hard my head would explode. They’re rather funny. Plus, I think autocorrect is a tool of Satan, so I’m glad these spellcheck sisters are spreading the anti-Gospel.

“The Sibyl of Mars,” performed by L. Nicol Cabe, of Seattle.

The premise: In this speculative fiction storytelling show, the Sibyl, a seer from Mars, has been sent to Earth to steal ancient records of the planet’s original colony. She must piece information together to learn why her home world’s ecosystem is collapsing, but she must do so before Earth authorities erase her memories and send her back.

Why it’s on my list: Sometimes it’s all about the resume. Go to Cabe’s website and you can read about her background as a sci-fi writer, storyteller, director and dramaturg. (Hey, I took a dramaturgy class in grad school and am ecstatic when someone else in the world knows what a dramaturg is, much less is one.) And this show sounds fresh, weird and thoughtful, a nice combination.

“Does Fresno Get Into Your Stuff?”, performed by Blake Jones of Kingsburg.

The premise: Jones, a Rogue veteran, asks how “place” affects art. He brings together a different panel of guests for each show. Depending on the guest lineup, you might get song, dance, poetry or provocative ideas.

Why it’s on my list: For the simple reason that I, your friendly neighborhood arts blogger, is one of those guests. Yes, I’m making my Rogue debut. I am matched up with two other locals, Jaguar Bennett and Patrick Contreras, for a panel discussion (3 p.m. Saturday March 3). Now I just need to think of some insightful things to say. Part of me thinks that Jones stuck me in the lineup to get some free publicity. Well, it worked.

The cast of “ASS,” which will be performed at California Arts Academy.

There were a bunch of other acts I could have thrown onto the above list, including (but not limited to) the following shows. Most important Rogue rule: Be adventurous!

“Magic of Elder Returns,” featuring Kyle Elder on a Rogue mainstage for the first time.

“Nothing is Beautiful: Everything is Fine,” a dance performance from NOCO, its first in the post Amy Querin-era.

“That Kidney Show,” with Aileen and Tony Imperatrice showcasing their real-life double-transplant story.

“Ass,” an original play by Joshua Taylor. For an amusing “self-interview” with Taylor, click here.

Check out Joshua Tehee’s Rogue picks in The Bee.

Theater review: At the 2nd Space Theatre, ‘Mama’ knows best when it comes to the importance of the immigrant experience 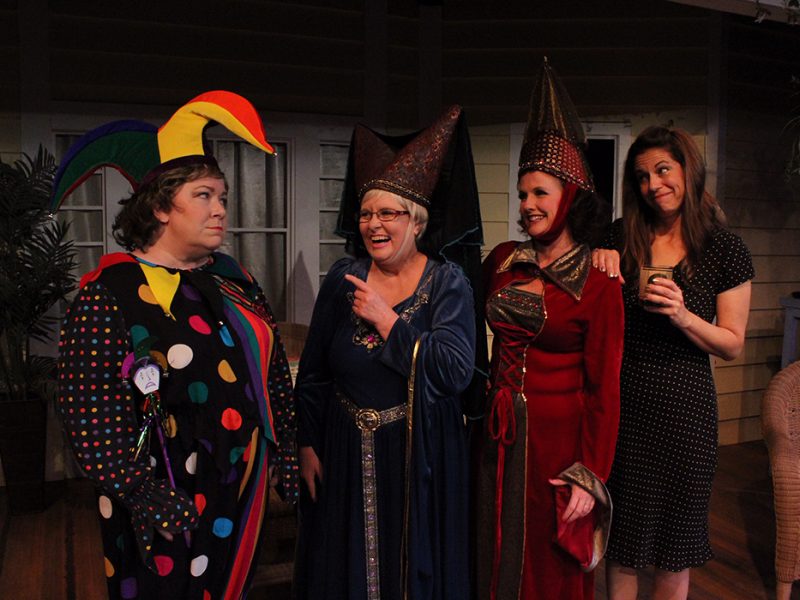