Just call her Caitlyn “Island” Lopez. In her last starring role, as Sophie in the Good Company Players production of “Mamma Mia,” she got to frolic on a picturesque Greek island. Now, as Ti Moun in the new Children’s Musical Theaterworks production of “Once On This Island,” she has the chance to call a gorgeous Caribbean island in the French Antilles home.

It’s a great role for the talented young actress, who stars in a cast that ranges in age from 8 to 23. I caught up with Lopez for an interview and to ask the burning question: If she had to choose between a vacation to a Greek island vs. a Caribbean island, which would she choose?

Caitlyn Lopez plays Ti Moun in the Children’s Musical Theaterworks production of ‘Once on This Island.’ Photo / Dylan Reyes

Q: Tell us a little about Ti Moune, the character you play in “Once On This Island.” Is she the kind of person you’d want to be friends with?

A: Ti Moune is a curious peasant girl who longs for more. She is ambitious, brave, and compassionate. I try to surround myself with people I can look up to, and Ti Moune would absolutely be one of those people.

Q: In the musical, four gods rule the island. How do they get along with each other? Tell us about the bet that sets up narrative of the show.

A: The gods get along fairly well, other than the conflict between Erzulie, the goddess of love, and Papa Ge, the god of death. Ti Moune prays to the gods. After hearing her prayers, the gods decide to send her on a journey to prove whether death or love is stronger.

Q: Ti Moune falls in love with a rich guy from the other side of the island, and because she’s a peasant, there are problems. This theme of lovers from different socioeconomic backgrounds is a popular trope in literature. How do you usually react to it?

A: I find it inspiring that love can survive even the toughest of adversities. It warms my heart to see that love has no boundaries even in today’s economic climate. I also try to keep an open mind to every person’s individual situation because that is where the true test of a person’s character lies.

You can win a four-pack of tickets to the family-friendly Children’s Musical Theaterworks production of “Once on This Island.” To enter, leave a comment answering this question: If you could travel to any island in the world, which would it be? (Or, if you’re shy,  simply tell us why you’d like to see this CMT show.) Deadline to enter is 10 a.m. Saturday, July 14. You’ll be able to choose any performance except opening night during the run.

Q: The musical is back in the spotlight because of an acclaimed Broadway revival. How much do you know about that production? Does the CMT version incorporate any of the revival’s changes?

A: I’ve listened to the revival and done a bit of research on the production. Our set has incorporated a lot of the same touches, like the boat, and other moving objects. Alternatively, our production incorporates physical huts and archways that I personally haven’t seen in a production before.

Caitlyn Lopez plays Ti Moune in CMT’s ‘Once on This island.’

Q: Set the scene for us by picking the moment in “Once on This Island” when you feel closest to your character. Do you look forward to it every performance? How do you feel when it’s taking place?

A: I think that the moment I feel the closest to Ti Moune is during the song “Mama Will Provide.” It’s my first time dancing on stage with the majority of the cast and listening to Ava Tafalla (Asaka) sing it every night just makes it so much better.

Q: Talk a little about director Josh Montgomery’s creative vision for the show.

A: Josh has done a fabulous job in directing, choreographing, costuming and designing the show. While it reminds me of the original production as well as the revival, it’s different and innovative and that’s what I love about it. He has worked so tirelessly and it really has paid off!

Q: Give us an update on Caitlyn. What are your plans for the future? Where would you like to be in five years?

A: I am heading to the Pacific Conservatory of the Performing Arts (PCPA) shortly after the show closes! I am ecstatic to be furthering my education in theater, and hope to continue doing so after my time at PCPA is up! Beyond that, I hope to continue performing in any way possible.

Q: OK, the big question: You win an all-expenses-paid vacation to an island but have to choose between Greek and Caribbean. Which would it be?

A: I’d definitely have to go with the Greek island. I’ve always wanted to go there! I love the food, the architecture, and, of course, the sparkling blue water! 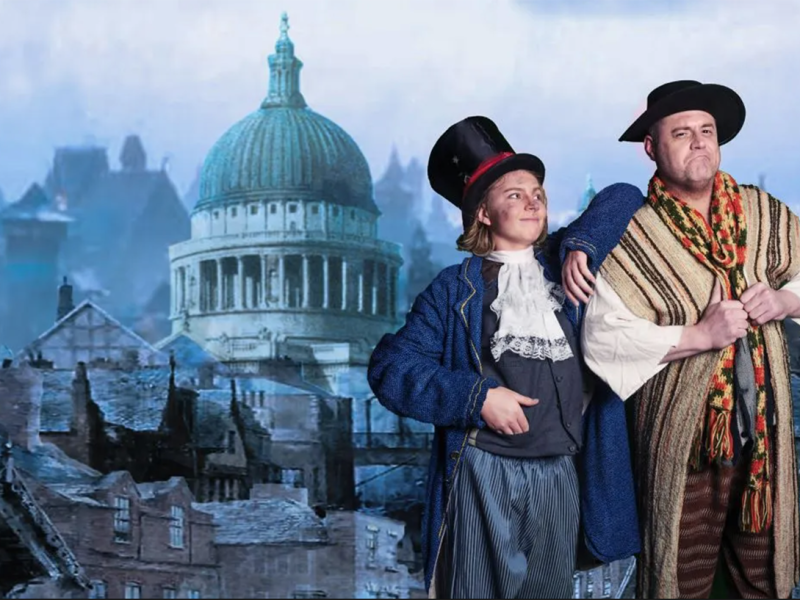