Let’s take a moment and revel with Fresno’s Mai Der Vang, whose poetry continues to get the kind of career-boosting national attention that could amplify her into a major voice. The latest pronouncement is a laudatory review in the New Yorker.

Critic Dan Chiasson makes Vang’s new book, the haunting and powerful “Afterland,” the leading item in a roundup of two “remarkable, virtuosic collections from young poets.” Vang’s book, published by Graywolf Press after she won the 2016 Walt Whitman Award, the nation’s most valuable first-book prize for a poet, is a complicated reflection on the “Secret War” in Laos during the Vietnam War era.

A featured spread in The New Yorker. Photo / Shane Moreman

When I interviewed Vang in April when “Afterland” was released, I asked her if the title alludes to ancestors in the Hmong perception of life after death. Or does it have to do with refugees traveling to a new home?

Vang, a first-generation Hmong-American who graduated from McLane High School before attending UC Berkeley and Columbia, offers a highly personal take on the immigrant experience but also steps back for a larger view of the Secret War. With “no firsthand memory of the trauma that shaped her,” as Chiasson points out, Vang relates the Hmong-American experience in a distinctive way, with her insights into the meanings and sounds of the Hmong language among her greatest strengths.

“Afterland” is, I think, two books. The one I have been describing, holding itself to its own stringent vision of verbal beauty, is among the most satisfying débuts by an American poet in some time.

Chiasson isn’t quite as glowing in his critique when it comes to Vang’s personal poems of immigrant life in which he feels her language is a bit looser and “less monitored,” saying he likes these examples of her work slightly less. But overall, he gives a sterling endorsement of her work.

There are thousands of poets in this country, and few of their names ever make it into the pages of the New Yorker, much less are they given such an auspicious review for a first book. Keep an ear open for Mai Der Vang. A quiet roar is building. 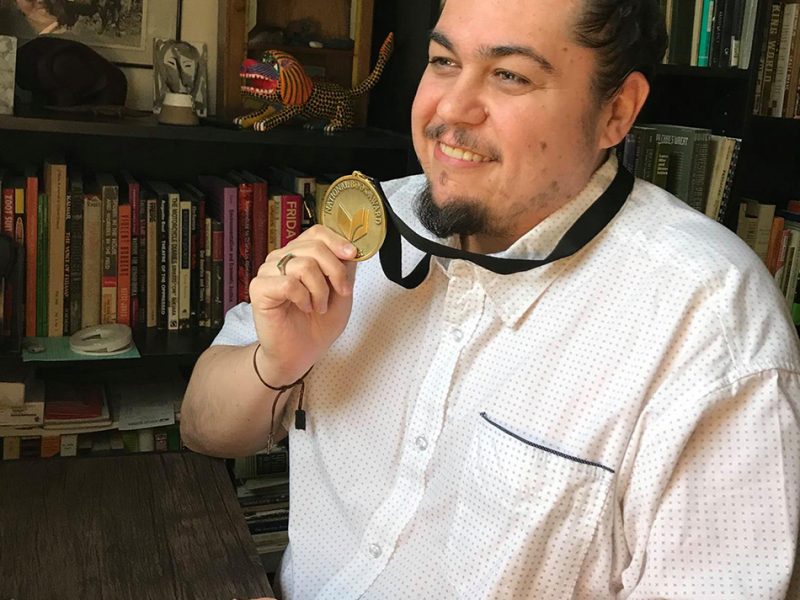 Anthony Cody finds out tonight if he’s a National Book Award winner. (But he’ll always be a finalist!)