This is a roundup of news, reviews and notes from the third week of the CSU Summer Arts program, which is back at Fresno State after a five-year absence. I’ll be updating this post as the week progresses. If you have Summer Arts tidbits or thoughts on a performance you’d like to share, email me at donaldfresnoarts@gmail.com. For the public calendar of events, click here.

The event: Two world-renowned percussionists, the Brazilian master Mario Pam and Afro-Latin bandleader John Santos, come together Saturday evening in a “Percussion Discussion” at CSU Summer Arts. (The above video is from a rehearsal prior to the lecture.)

The intro: The audience is greeted by Umi Vaughan, the course coordinator (and CSU Monterey Bay professor) who arranged the meeting. “You guys have walked directly into my dream come true,” he exclaims to the audience.

The setup: In an introductory procession, the three men set the scene by coaxing wonderfully intricate rhythms out of nothing more than simple percussion gourds. Then we settle into a stimulating format that alternates between Pam and Santos each speaking a little (Vaughan translates for Pam’s Portuguese) and listening to them perform. It’s an opportunity to learn about Brazilian and Cuban choreographic customs, which share many attributes. Percussion in the Americas is a complicated blend of indigenous, colonial and African-slave traditions, and the two percussion masters each represent major cornerstones of the tradition.

The overarching theme: Drumming is a language that transcends language and culture. From the time we’re in the womb, thumping happily along to our mother’s heartbeat, our world is defined and enhanced by rhythm even when we aren’t aware of it.

The rhythm of resistance: If colonial masters had prevailed, percussion would have been silenced. We often forget today that the beat of a drum includes a long history of social and political commentary. In the Catholic-dominated regions of the Americas, an opening for this drumming was permitted because of the Carnival tradition (especially in Brazil and Cuba) and other religious events. And even when drums were banned, people found other ways to satisfy the percussive urge, such as “playing” the wooden crates used to transport goods on ocean freighters.

The performance: Pam and Santos make it all seem so effortless, hands flying as they pound, tap, touch and finesse their instruments. You can use a drum to put a baby to sleep. (And they demonstrate.) And you can use a drum to rouse people to war. Buried deep within our genes, it seems, is the susceptibility to the driving, forward momentum of percussion. I could feel my heart start to beat faster in a visceral reaction to the rhythms.

The history lesson: I’m entranced with what Santos tells us about the percussive tradition in the United States. African drumming didn’t take hold in this country like it did in other parts of the Americas because it was repressed under the Protestant slave tradition. But as Santos demonstrates playing us the simple famed clave beat (a syncopated rhythm pattern of alternating phrases of three and two beats used in Latin dance music), the drumming roots are certainly part of the U.S. culture, from early rhythm and blues to funk to hip hop. Clap your hands: clap-clap-clap, pause, clap-clap. You know it.

The culmination: At the end of the discussion, Vaughan leaves the stage and lets Pam and Santos engage in a “drum conversation.” It’s magical. Starting off with vocals, then progressing to congas, the two musicians thrust and parry with each other using rhythm. The result feels organic and alive, and as the conversation builds in intensity, I could feel that heart-pounding thing kick on.

The takeaway: This was one of the most successful Summer Arts lectures I’ve ever attended. I love the way it incorporated both academics and performance in a stimulating and provocative way. I learned something and I was moved. That’s a great combination.

Yannick Jacquet, above, talks to a CSU Summer Arts audience on Wednesday. In the lecture, which I attended, the Brussels resident shared highlights from the past 10 years of his artistic career which includes eye-popping visual creations involving video, light, sound and projections. My favorite of the projects he described: his recent “Flow” installation on a floating barge at the foot of the Alexandre III Bridge in Paris. I was
entranced by the way he designed his colored LED bulbs to gradually cycle through various hues and variations, giving the work a sense of change on a very slow, seasonal scale. Jacquet’s work includes the “Mecaniques Discursives” series, pictured in the above photo, consisting of site-specific works that he has created with the printmaker Fred Penelle. As far as I can tell, the kaleidoscope of video projections that Jacquet includes with the “Mecaniques” series is similar to what he’ll be unveiling with CSU Summer Arts students at the “Video Projection Mapping in 3D Space” in the free student showcase (9 p.m. Friday, July 21, South Gym). (Photo by Todd Sharp, CSU Summer Arts)

Thursday’s public event (7 p.m., John Wright Theatre) might sound a little too technical for folks. But I definitely want to go to hear Yannick Jacquet, a projection mapping artist and founding member of the AntiVJ visual label, after watching this YouTube video about his past work at Summer Arts, shared with me by festival director Rachel Nardo:

After watching the video, you might want to mark your calendars for the free student showcase for the class, which is 9 p.m. Friday, July 21, in the South Gym.

Born in Geneva in 1980, Yannick Jacquet lives and works in Brussels. Media & plastic art artist, his work was presented at Contemporary art events, museums & galleries, in Paris, Moscow, Tokyo, Brussels, Montreal and Taiwan. He has received awards at the Milan Design Week and the collector’s prize at Brussels Slick Art Fair.

The event: a dance performance by Urban Bush Women, making a return appearance in Fresno as part of Summer Arts. Monday evening’s dance concert is essentially the kick-off of the second and final two-week session in the program, and the John Wright Theatre is crowded with students and community members.

The program: The audience is treated in the first half to an intense work by the company: “Walking With ’Trane,” inspired by the music of legendary jazz musician John Coltrane. The six dancers — five women and one man — include the piece’s co-choreographer, Samantha Speis. After an intermission, the dancers return for selections from another piece titled “Hair Stories.”

The Coltrane connection: Trying to describe music in words has kept a generation of music writers busy. The “‘Trane’ piece suggests a similar challenge for dance: How do you put into concrete movements the feeling and energy of Coltrane’s music?”

What I like about the piece: The intensity. After a long and painstaking preamble, in which each of the six dancers slowly emerge onto the stage with extended solos. There’s a point when all of them strike a pose facing the audience, with Speis front and center, and the tableau they form feels so regal and authoritative that it’s spellbinding. Also impressive: the emotional peaks and valleys of the piece, from big and almost brutal highs to breathtakingly quiet lows, with a tremendous sweep in between. At one point, dancer Tendayi Kuumba offers an impassioned vocal solo in which she scats and sings as if she’s channeling Coltrane himself. It’s a stunning moment.

What I don’t like about the piece: I might be in the minority here (the audience seems very enthusiastic), but I found parts of this excerpt of “ ‘Trane” to be overly self-indulgent, unfocused and sometimes downright tedious. The video projections, including lots of fast-moving storm clouds and clunky animations, feel overwrought, and voiceovers by the company members at the end of the piece are too obvious. The physical stamina required of the dancers is impressive, but the ultimate goal of the piece — to find a visual language to describe Coltrane’s music — is arguably never achieved.

The second half: “Hair Stories” is a hoot of a piece, part dance and part revival meeting, and we even get an infant on stage (brought out by Speis) and the chance to celebrate “baby hair.” With its comic underpinnings and brisk theatricality, the piece is a spry and vigorous way to end the concert and kick off the second half of Summer Arts.

He is a veteran illustrator, writer and creator in the field of comics, having worked for both DC and Marvel in addition to his own creations. He has worked in the field of animation for over twenty years, directing on shows such as The Batman, Avengers: Earth’s Mightiest Heroes, and Transformers. He is currently directing on the third season of Young Justice for the WB.

Note: This is a change from your printed Summer Arts programs, which lists Rad Sechrist as the speaker.

Related story: CSU Summer Arts program returns to Fresno with enthusiastic leadership and commitment to firing up the cultural scene 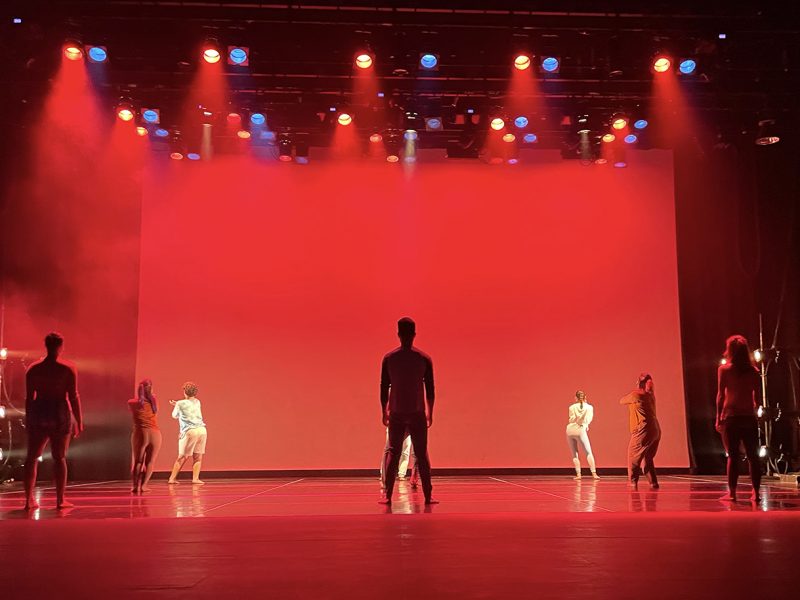