Are you a flute lover? Prepare to be serenaded with Moment Musical

We’re looking at another relatively quiet weekend on the local arts scene. (And I’m hearing that tickets are quite scarce for Sunday’s double-bill of “Calculus: The Musical” and “Curie Me Away,” which I previewed on my January CMAC show, so if you’re looking for something to do, you might be out of luck there.) Which gives me a chance to lavish some attention on Moment Musical and its “Sunday Serenade” concert at Westminster Presbyterian Church.

This faithful chamber music ensemble has been around since 1989. The top-notch musicians who regularly contribute their talents to the loose-knit group are among the best in town. One of them is Janette Erickson, principal flutist for the Fresno Philharmonic. She’s excited to showcase the French composer Michel Blavet (1700-1768), known as the best flutist of his day.

Erickson, accompanied on cello and piano, will perform Blavet’s Sonata in G minor, one of six flute sonatas written by the composer. All were dedicated to well-known women. I wanted to learn more about this piece from Erickson, the expert:

Q: Tell us a little more about Michel Blavet. Did you learn about him in school?

A: I played Blavet’s sonatas as a high school and college student. My favorites are No. 4 and No. 2. It was said that Blavet was the best flutist of his day, and that he played in an exciting, exact and brilliant style. Although they say he played left-handed, in his portrait he looks right-handed to me. Frederick the Great (also an avid flutist — there is famous painting of him playing with his court watching), tried to hire him. But, since he didn’t offer much money, Blavet turned him down. Later, Frederick offered more money to Quantz, who had been his teacher. So Quantz ended up at court, teaching the king, making his flutes and writing music for him. Quantz is actually shown in the painting with Frederick the Great.

Blavet wrote the six flute sonatas in Gallant style around 1732. They were performed with the transverse flute (not recorder), viol da gamba and harpsichord. The viol da gamba was the ancestor of the cello (a smaller cello). It doubled the bass line of the harpsichord, because that instrument was rather weak and needed more sound on the bass. This kind of writing was actually a duet between the major instrument and the bass line of harpsichord and viol da gamba. The harpsichord players of that day made up or “realized” the right-hand part of the keyboard, making sure that it has nice voice leading. It’s a lost art today.

Q: The sonata you’re playing is titled “La Lumagne.” What can you tell us about that?

A: We don’t know who La Lumagne was, but I think that he liked her. I believe that the last movement, which also has a title, “Le Lutin” (meaning elf or goblin), might have been an allusion to her son. It is playful and fast. The other sonatas don’t have another movement with a name like this. Lutin is elf or goblin.

“La Lumagne” has 5 movements, pretty much like a suite of dances.

Q: Why did you select this particular sonata to play on Sunday?

A: What I love about this piece is the opening movement. It is a little dark, being in G minor, and the line leads beautifully forward. The shapes of the phrases are fun to play. I like the idea of the lady walking unevenly in the Presto-step-slide. I also like the idea of a possible mischievous son, racing around. Basically, I feel that I can shape the phrases in many ways and use my imagination.

Q: I read that Blavet held his flute to the left while he played, the opposite of how most flutists hold theirs today. I never thought about this before: Does it matter if a flutist is right-handed or left-handed? Have you ever held your flute to the left?

A: I have seen only one left-handed flute in a flute convention. The modern flute has to be reconfigured with all of its keys going in the opposite directions. In the Baroque days, I don’t think they bothered to reverse the keys (there was only one key initially). My guess is that they just placed it going to the left instead of the right. But, if you leave your hands and fingers on the same holes, there’s rather a torque to hold it. It’s possible that they replaced the hands in the opposite positions. It might have been the flutist’s choice.

The flutes were usually wooden, with just one key (in the Baroque) and up to several keys later on, until Theobald Boehm restructured the flute with so many keys, starting around 1840. So, looking at the painting of Blavet, it looks to me as if it’s one key (which wouldn’t be so difficult to switch around). The Baroque flute also had the middle joint divided into 2 parts. The upper joint was replaced, depending on the key and pitch.

Q: Can you tell us a little more about the other pieces on the program?

A: We have a string quartet by Shostakovich, a sonata for oboe and piano, and also a string trio performing a Dohnanyu serenade for violin, viola and cello for this concert. We always follow the concert with a reception open to our guests.

Q: What is the background of Moment Musical?

A: I founded Moment Musical in 1989. Rachel Aldrich, Linda Hamilton, Alan Rea and I first performed a chamber piece by Quantz on a solo recital that I did with Alan in 1989. We had so much fun that everyone liked my idea of starting a chamber music ensemble. The performers suggest pieces that they would like to do over the course of a season (four concerts usually). Then, two of our members put programs together, kind of like a menu for each concert. We like diversity. 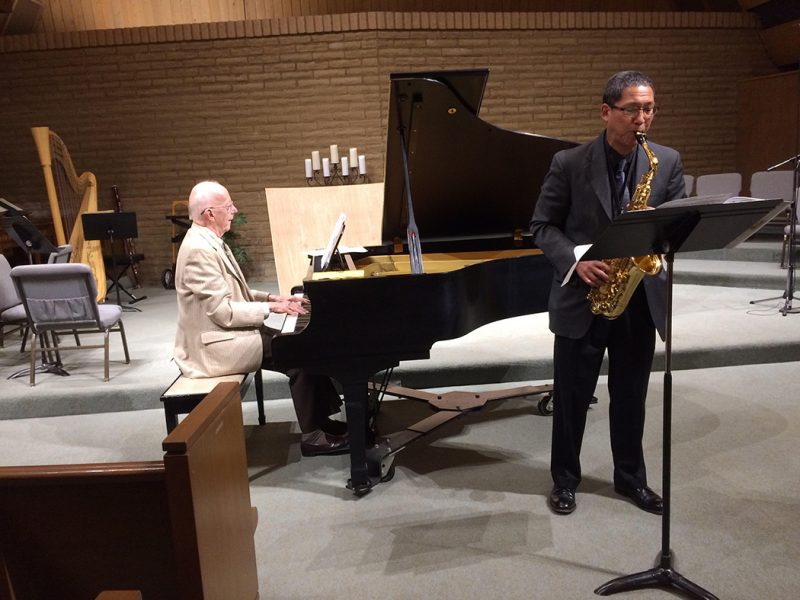 The List: Moment Musical kicks off season, Filmworks catches fire, and I get an award from Sierra Art Trails