UPDATE 04/14: The results are in for the Musical Theatre Initiative scholarship at the American College Theatre Festival at the Kennedy Center. Dom writes from D.C.:

Hey Donald! So, as a surprise to all of us, they ended up giving away the awards last night. I did not end up winning the full scholarship, but I had an amazing time participating in the showcase. I plan to do whatever I can to attend the Open Jar program, especially after getting a taste of it this week. It was such a motivating and special experience. I also now know what it feels like to perform on one of the nation’s most prestigious stages, and I’ll cherish that forever.

Congrats, Dom, for making the West Coast (and College of the Sequoias!) proud. Now, in your short time remaining in our nation’s capital, are you going to be able to at least squeeze in that visit to Congress?

ORIGINAL POST 04/13: Those of you who follow musical theater in the central San Joaquin Valley probably already know that Dominic Grijalva of Selma, one of our great talents, is in Washington, D.C., this week competing for national honors in the American College Theatre Festival. Dom, a Fresno State graphic design major, is representing the College of the Sequoias and one-eighth of the entire country in the Musical Theatre Initiative. He and seven other regional winners, plus two recipients of other musical theater-related awards, are singing at the Kennedy Center tonight. He will find out Saturday afternoon if he gets the big prize: a full scholarship to the Open Jar Institute, which is a week-long Broadway training program in New York this summer. Plus bragging rights, of course.

And what’s he singing at the Kennedy Center? The same song that he performed at the regional competition in Mesa, Ariz.: “Satisfied,” from the musical “Hamilton.”

“Without fail, every time I’ve been asked that question this week the answer has been met with shock and intrigue,” he says. “I admit — that’s always fun!”

The week has been chock full of activities, including master classes. In his own words:

“Throughout the week, I’ve been taking master classes and workshops with local and professional actors who have vast experience in the industry, having worked all over. We’ve spoken with and have heard stories from people who have worked from Broadway and beyond, and from those who have been able to make a professional career work for them locally in DC. Some workshops have been for acting and singing, while others have been in dance and insider information about the industry. All of the classes have been extremely interesting! One of my favorite workshops was with Donna Migliaccio, who played Emma Goldman in the most current revival of “Ragtime”, and served as Patti LuPone’s standby in “War Paint”. She was such a phenomenal woman who had so much to share about her time in the both productions, and was happy to answer any questions we had about it.”

In an amazing confluence of events, Dom was actually at the Kennedy Center just a few weeks ago as a designer for a production of “In the Heights.” (Which, by the way, is the show he was in at College of the Sequoias that nabbed him the musical-theater nomination that launched him toward the nationals of ACTF.) Now he’s back as a performer.

“I’m so happy that both of my passions led me to the Kennedy Center for completely different reasons. How many people can say they’ve done that? It feels like I’m doing something right.”

By the way, Dom has been twice to Washington now and still not gotten to see the tourist sights because his schedule has been so busy. Still, if he gets a chance, here are five things he needs to do:

2. Wait too long in line to go to the top of the Washington Monument.

4. Catch a performance at Ford’s Theatre — and take the obligatory photo with Lincoln’s booth in the background.

5. Make an impassioned speech to a joint session of Congress demanding federal funds in support of musical theater across the nation.

Well, that last one might have to wait for a while. But I’ve got my fingers crossed.

I’ll give you an update on Saturday afternoon when the results from Friday are announced. 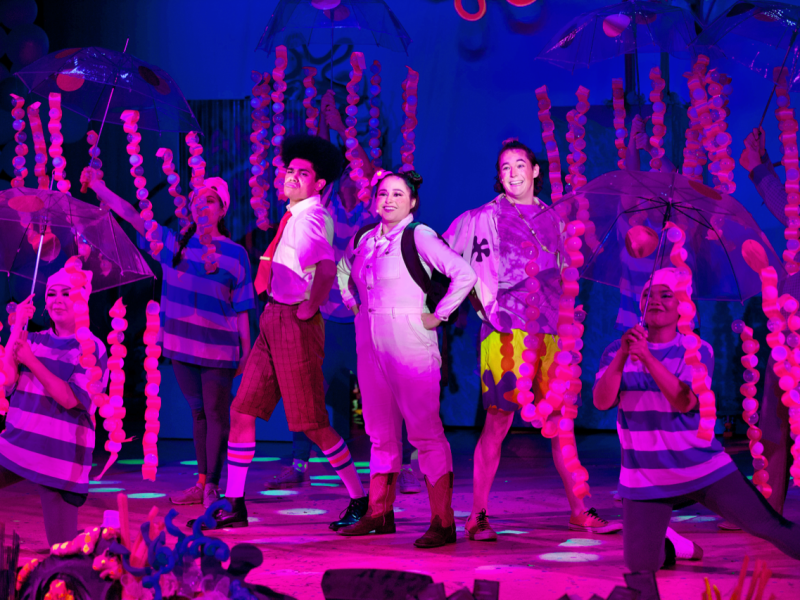 With a nudge from Salon, people are reading once again about Selma Arts Center’s ‘Spring Awakening’