I’m pretty ho-hum on Cirque du Soleil’s “Corteo” (which continues through Sunday, Sept. 23, at the Save Mart Center.) It’s a fairly nice show in parts, but it didn’t wow me overall. Some thoughts:

The stage: Imagined as a 1920s Italian theater, the production’s intimate setting and clever, double-sided stage makes nearly every ticket in the house a good seat. (Avoid the extreme sides, but you don’t need to shell out the big bucks for a floor-level seat.)

The ambiance: Warm and nostalgic. With a sometimes dawdling pace, I found it more relaxing than most Cirque shows.The show has a red-wine-buzz-after-big-pasta-dinner sluggishness for much of the time.

My favorite act: Four enormous white helium-filled spheres, bunched together like a clump of balloons, became transportation for an attached dwarf. (Did I wince a little, worrying this was a drift toward freak-show territory? Perhaps a little.) I was entranced as the “Clowness” — a woman with a chirpy, high-pitched voice — floated around both sides of the arena, descending every so often to the point where audience members had to send her skyward with a push on the bottom of her feet. (It was like watching a beach ball bouncing around a crowd, except in slow-motion.) The size of the spheres, the banter of the performer, and the lazy way the spheres floated unhurriedly along all gave this act a soothing and settling feel.

My least favorite act: There are some duds in this show. The bouncing-beds routine never sparks. The juggling was pretty nondescript. And a comedy bit titled “Teatro de Intimo,” which offers a dwarf production of “Romeo and Juliet” in what is meant to be a spirited farce,becomes that agonizing skit that thinks it’s far too funny to end. And it doesn’t.

Most nerve-racking act: The Teeterboard, for sure. Acrobats using a see-saw platform flew far higher into the air than I would have expected, then offered corkscrew flips and other such contortions on the way down. Thing is, the performers kept having these little stumbles, and once or twice a full-scale wobble, all of which made the part of my brain that says wise things such as “Hey, mister, it’s very likely you’re going to see someone fall on their neck and shatter it into 50 little pieces, so you’d better just cover your eyes.” I don’t know if the stumbles were intentional, but I was a little terrified.

The weirdness: Let’s face it: Each and every Cirque production has sections that come across as if the writer had 1) been on acid; 2) abandoned another career as a Jungian dream analyst; or 3) taken a semester-long immersive film seminar on “Eraserhead.” We’re talking random juxtapositions, surreal images, just plain bizarre images. In this show, for weirdest moment, I’d have to go with the very strange contingent of flying angels in harnesses. (At one point, high in the air, they greet a four-poster, wrought-iron bed upon which is perched a just deceased clown; the loose narrative of the show is that the clown is witnessing his own funeral parade.) Dressed in frilly, ankle-length white dresses that reminded me of straitjackets, the angels looked like immobile Christmas tree toppers. As they were hoisted up and down — sometimes quite abruptly — I decided that if this is the way angels fly, the job classification isn’t quite as prestigious as we might think.

Blood-rush-to-the-head award: The clown, wearing a white, egg-shaped hat and clutching a candelabra, “walked” upside down the length of the stage, his feet seeming to grasp a laser-beam line overhead. Yes, that was pretty cool.

The ranking compared to other Cirque arena shows: Not in the top half. One of the challenges of the Cirque universe is that the entertainment behomoth’s newer offerings — such as the amazing “Toruk,” which played in Fresno in 2016 — can be so technologically sophisticated and designed to evoke large-scale awe that it keeps raising the bar. “Corteo” is nice, but it just felt a bit underwhelming. 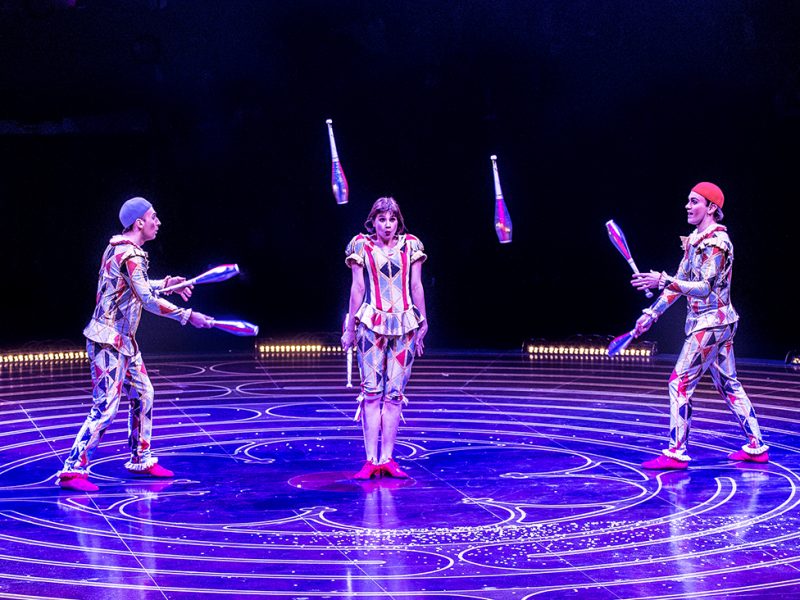 How to juggle and get paid for it: Be good enough for Cirque du Soleil 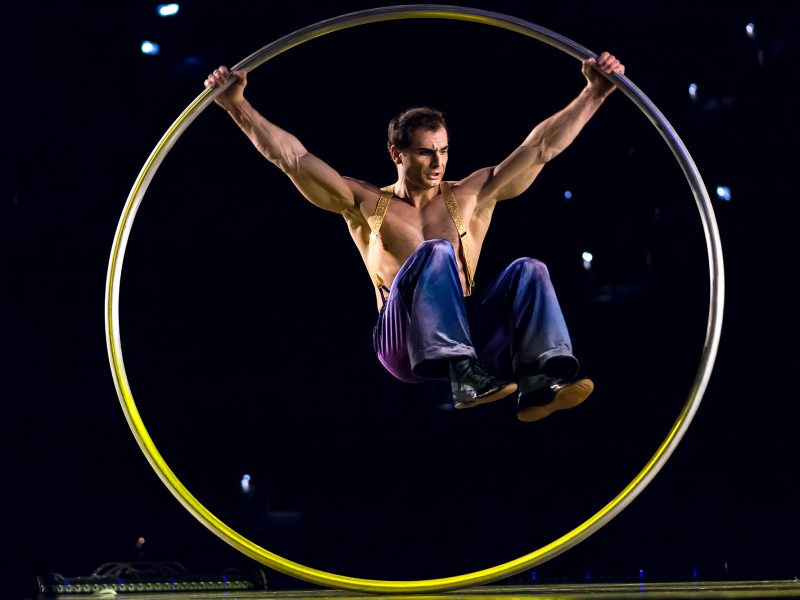 Opening night at Cirque du Soleil: You can win tickets