After 10-plus months of staying at home, you’ve probably developed a much closer relationship with Netflix. And your Kindle. And Spotify. The list goes on. And thank goodness, because film, TV, books and music have kept many of us sane. But have you run out of meaningful stuff to consume? Inspired by a recent Wall Street Journal survey in which various national tastemakers — actors, artists, directors, musicians and other creative types — shared some of their quarantine discoveries, The Munro Review offers a local version. This series will feature a handful of new picks every few days, and you’ll find the older responses at the end of each new installment (see below). You’re welcome to put your own discoveries in the comments section.

State employee by day; performer and vlogger by night.

Quarantine discoveries: “I’m a bonafide YouTube junkie and I heavily consumed content on gardening, minimalism, DIY projects, and climate change. I discovered content creators such as Planterina, Earth Mama Medicine, Hallease, and Yoga with Adriene. And I caught up on the at-home versions of ‘The Tonight Show with Jimmy Fallon’ and ‘The Daily Show with Trevor Noah.’ ” She binged podcasts on Spotify such as “Sustainability Defined,” “The Michelle Obama Podcast,” and supported local podcasters “Java with Jacob” with Jacob Moon and “Dead Folks Podcast” with Haley White and Brooke Aiello. She read about 25 plays with the Backyard Readers Theatre Lab (BYTRL), and my favorites have been “Br’er Cotton” and “Quixote Nuevo.”

Up next: She’s excited to read more plays, particularly “God of Vengeance” and “Indecent.” Her next podcast to binge is “Black Hair in the Big Leagues” with Fresnan Salisha Thomas.

Quarantine discoveries: “The standout series I streamed during the pandemic was ‘The Queen’s Gambit.’ (And yes we bought a chessboard afterwards!) The acting, writing and mid-century period setting all made for great watching. Early in the pandemic, I also did a deep dive into classic film noir: ‘Out of the Past,’ ‘Double Indemnity,’ ‘The Killers, ‘The Asphalt Jungle,’ ‘In a Lonely Place’ and ‘The Big Heat,’ among others. This was such an amazing era of film and, for me, it was helpful to experience American culture from a time when the default assumption was that things would not turn out well.

Up next: Several books are up for him: Barack Obama’s memoir, New Yorker music critic Alex Ross’s book on Wagnerism, and Scott Anderson’s ‘The Quiet Americans’ about the CIA in the early years of the Cold War.

Author/Op Ed Columnist; recently co-authored: “The Words Between Us: A Pandemic Abecedarius,” a docu-memory about life during Covid.

Quarantine discoveries: Binge watched “The Restaurant,” “Last Tango in Halifax,” “Riviera,” “The Queen’s Gambit,” “Paris, je t’aime.“ And she loved stumbling across a pirated version of “Grey Gardens” on YouTube. “Such a guilty pleasure,” she says.

Up next: Submitting a “Tiny Love Story” to New York Times and putting finishing touches on a spring course for OLLI at Fresno State: “Embracing the Journey: Writing Your Heart Out!” And a COVID vaccine so I can book flights to New York and Paris.

Poet, Professor, author of “Scar and Flower,” finalist for the 2020 Northern California Book Award in Poetry.

Quarantine discoveries: More Bong Joon-ho films. “I loved ‘Parasite’ so much that I bought it on DVD and have watched it five more times. There’s something new to love every time I see it. I loved ‘Okja.’ I also watched and thoroughly enjoyed ‘Snowpiercer’ and ‘The Host.’ I’m watching ‘Barking Dogs Never Bite’ tonight.

Up next: “Lovecraft Country.” He liked Jonathan Majors in “The Last Black Man in San Francisco” and some good friends  recommended the series.

Quarantine discovery No. 1: “Virtual programming I couldn’t have attended live. This year I enjoyed the Virtual Dickens Universe Conference at UC Santa Cruz, which highlighted Frances E.W. Harper’s “Iola Leroy,” a 19th Century novel by an African-American woman I hadn’t known before. Also, I got to produce and moderate a panel of theatrical artists from all over the nation regarding adapting Austen to the stage for the Jane Austen Society, and I’ve enjoyed fringe performer Martin Dockery’s almost-monthly shows streaming on YouTube called ‘Right Now.’ Virtual programming doesn’t replace live, but I predict that it will create its own space in our arts ecosystem.”

Quarantine discovery No. 2: TikTok. It may inspire mockery from the uninitiated, but she says that TikTok has grown beyond cute dances and lipdubs into an incredibly muscular tool for creativity, communication, humor and ideas. “There is a ton of informative, inspirational, educational, and downright theatrical content with a DIY flair. As always with social media, though: your mileage may vary!”

Up next: After finishing “Bridgerton” on Netflix, “Lovecraft Country” on HBO, and listening to “A Promised Land” by Barack Obama on Audible, “I’ll be producing Virtual Rogue Festival 2021 in March where we’re beaming in performers near and far for two weekends of storytelling and indie theatre. . . all from my tiny desk in the Tower District.”

Board president, Children’s Musical Theaterworks; local business owner who found her way back to the family business (Fresno Neon Sign Co., Inc.) after working the first half of her career as an attorney.

Quarantine discoveries: After 10 years with a jam-packed schedule and literally no free time (work, family, volunteer work, kids sports, theater, family trips, etc.) she caught up on some older TV shows she missed, including “Blacklist” (Netflix) and “Once Upon a Time” (Disney Plus). “I also re-watched ‘Lost’ (Hulu), which was a show that I loved in my pre-kids life, but missed the ending when life got too busy. I just have the season finale left (so don’t spoil it!). I also loved ‘The Umbrella Academy,’ ‘Ozark’ and ‘Locke & Key.’ My husband and I introduced the kids to a few of our favorite childhood movies, like ‘War Games’ and Ferris Bueller’s Day Off,’and we also watched ‘Hamilton’ on Disney Plus to see how it compared to the live version that we saw last year in San Francisco. I read ‘The Lions of Fifth Avenue’ (Fiona Davis) and every Kate Morton book I could get my hands on. I had the time to try a few different things with my garden, growing quite a bit of our family’s fruit and vegetables.The lettuce is my favorite, but I have a secret source for the best lettuce seeds!”

Up next: “The Queens Gambit” and “Salt Fat Acid Heat” (both on Netflix). “I may even read the book by Samin Nosrat, since it appears that I will be eating nothing but my own cooking for a few more months at least, so I may as well get inspired!”

Coming in the next installment of Quarantine Discoveries: Kathleen McKinley, Anna Hamre, Josh Tehee, Jonathan Aguirre, Roger Christensen and Haley White offer their recommendations. Below, you can find responses from the first installment.

Retired Professor of Art at Fresno State, former director to three Fresno Arts Councils and maker of the mosaic bench panels on the Fulton Mall. “I’ve stopped taking on large art projects since moving to San Joaquin Garden, except for painting designs on small rocks to scatter around the grounds.”

Quarantine discoveries: “I’ve been rewatching “Pie in the Sky,” a series I got hooked on when I spent a lot of time in England in the 1990s. It’s about an English detective who would rather be cooking in his restaurant than solving crimes. I follow that up with ‘The Great British Baking Show.’ It’s my way of canceling out all the daily news.” She recently read the “Splendid and the Vile,“ by Eric Larson, about Winston Churchill during the early days of World War II and how the British got through the Blitz. “It was especially interesting to me because of the years I spent teaching in London.”

Up next: She’s getting ready to read “Livewired,” by David Eagleman, an investigation of the ever-changing ability of the brain to adapt.

Up next: “Dust off my old vinyl  albums; learn some guitar; finish “Behave (The Neuroscience of Psychology)”; edit/record another album.”

Editor-in-chief of The Fresno State Collegian, contributor with CalMatters

Quarantine discoveries: “A Man Called Ove,” Fredrik Backman’s 2014 novel. “It’s a story about an old man named Ove who lives alone and is extremely bitter. Ove’s story is both filled with moments of joy and sadness, and the book really makes you appreciate the small things in life.” He also finally got the chance to watch the movie “Spotlight,” which details the Boston Globe’s investigations into the Catholic Church. “The immense level of detail they put in to show newsroom culture and just how much work goes into an investigation made me gain a greater appreciation of investigative journalism.”

Up next: Listening to more late ’60s and ’70s music. “I’ve really loved listening to The Velvet Underground lately, so I want to find more bands from that time.”

Quarantine discoveries: “Schitt’s Creek.” “I watched all the seasons in a few weeks. Loved it. Caught up on ‘The Crown.’ Was riveted by ‘Turn.’ Enjoyed some brilliant comedy: Seth Meyers’ “Lobby Baby,” Mike Birbiglia’s ‘The New One,’ Steve Martin and Martin Short’s ‘An Evening You Will Forget For The Rest Of Your Life,’ and Carl Reiner’s ‘If You’re Not in the Obit, Eat Breakfast.’ I got acquainted with Ta-Nehisi Coates’ work, reading some of his articles and his bestseller, ‘Between the World and Me.’ And I’ve watched soooooo much HGTV and read way too much news.”

Up next: She wants to learn to juggle.

Actor/Coach/Director/Writer: Playing next in the play “The Line” (Jessica Blank & Erik Jensen) for Rogue 2020; pre-production for “landslide” (an original web-series by him); and spearheading The Valley Theatre League.

Quarantine discoveries: At the beginning of shelter-in-place, he and his kids vowed to geek out and watch all of the titles in the Marvel Cinematic Universe … in order. That led to the discovery of the “Defenders” series, et. al. “However, with the onset of protests in reaction to the senseless killings of people of color, I felt drawn to literature and reference materials addressing Social and Emotional Wellness. I even received my Certification in Mindfulness and Social-Emotional Training, thereby expanding my skill set to better address the trauma of racial inequities.

Is theater back? Good Company Players will return to live performance at Roger Rocka’s on April 23 (cross your fingers) 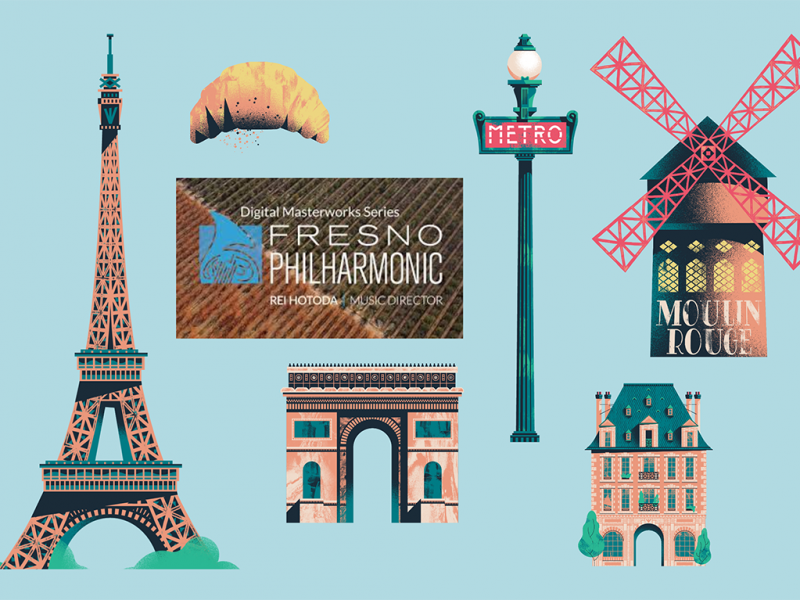 From France with love: Fresno Philharmonic gets a little absurd in new digital Masterworks concert