Review: Fresno State’s ‘To Thine Own Self’ rings true by reimagining Shakespeare

Is Fresno ready for Shakespeare’s “Romeo and Julius”? Of course it is.

Is it? (He asks plaintively.)

After all, we’re in 2021. And one of the most comforting things about “To Thine Own Self Be True: Gender, Sexuality, and the Bard,” is how regular it seems. Twenty years ago, there might have been picket signs bearing the infernal slogan “It’s Adam and Eve, Not Adam and Steve” waved in front of the John Wright Theatre on opening night. Fast forward to today, when streaming services have enough gay content to bring down the Logo network. Shakespeare from an LGBTQ/non-binary perspective just doesn’t make the waves it did.

Pictured above: R.L. Preheim, left, and Andrew Mickelson spar in ‘To Thine Own Self Be True.’ Photo: Fresno State

Besides, it’s a lot harder to protest a video production.

With this collection of scenes, monologues and sonnets, director Brad Myers offers a fresh and compelling take on material known for, well, its heterosexuality. The production features 28 Fresno State actors, and the piece is skillfully edited by Professor Candace Egan (with help from students in the university’s Department of Media, Communications and Journalism). It’s virtual, of course. It was filmed on campus using socially distanced protocols. Which means that in terms of physical contact, the result is downright demure, especially compared to some of the hot-and-heavy, R-rated Shakespeare I’ve seen recently. But, psychologically, it still creates some romantic heat.

Fresno State has done a nice job with the tech presentation, including Liz Crifasi’s sound design and Regina Harris’ lighting. And I like Egan’s visual aesthetic throughout: Full-screen images introducing various segments segue into prominent borders around the filmed performances. (Some of those images are stock; others were generated by the editing team, such as the Stonewall collage, the non-binary flag and skies for “Antony & Cleopatra.”)

Here are five things I really like about the show.

1. The way the moon disappears from the sky as we transition into the morning in the “Roméo” scene. In this incarnation, one of the star-crossed lovers — pronounced Rome-ay-o (a standout Carlos Sanchez) — is a migrant worker, and Julius (a moving Anthony teNyenhuis) is a wealthy landowner’s son. The famed balcony, represented by a sturdy ladder, becomes not only a barrier between rival families but also a delineation between race and class. (Sanchez recites his monologues in Spanish.) When Julius asks, “Dost thou love me?” the jolt for the modern-day audience is much more electric than you’d get simply from a young Capulet and Montague making eyes at each other. There is danger here, and passion, too.

2. A sheltered Miranda (Rachael Maire Maciel) unleashing her love for Fernanda (Rebecca Elise Packard) in “The Tempest.” Enslaved by Prospero and forced to haul logs, Fernanda is a revelation to Miranda, who likely never imagined that romance or meeting her “husband” could be quite like this. Maciel and Packard bring a bright yet nuanced sensibility to their characters, making the love talk crackle. At the end they hold out palms to each other, not quite touching, and somehow it’s sexier than the most explicit episode of “Vida.” Years from now, looking back on this production, this image will endure as a poignant reminder of social distancing.

3. Jimmy Haynie as a non-binary Cleopatra. Adorned with a fabulous turban, facial hair and a Pharaoh-style necklace collar dripping with spangles, Cleopatra accosts Mark Antony (a stirring, pugilistic Andrew Trevino) for fleeing back to Rome. There is little of the entitlement or rage you might expect from this haughty queen; instead, Haynie finds something unbearably sad within the character. It’s a sadness that spreads to Antony and beyond.

4. The women’s prison vibe of the “Julius Caesar” scene. Decius Brutus (Jenna Valencia) arrives to coax Caesar (Lexie Castellanos) to the floor of the Senate and her death, but not before the suspicious Calpurnia (Cecilia Cantu), Caesar’s wife, registers her objections. I was powerfully drawn to this scene. The fact that all three characters are women changed the dynamic in some subtle but powerful way. Decius’ playing on her bonds of sisterhood somehow seems even more of a betrayal than if the two characters were men.

5. Finally, my favorite scene in the show is a memorable moment from “Measure for Measure.” Angelo (R.L. Preheim), in one of Shakespeare’s nastiest depictions of abuse of power, uses his life-and-death authority over a prisoner to try to get the object of his infatuation into bed. In this twist on the heterosexual version, however, the prisoner’s sister, Isabella, has become Ignacius (Andrew Mickelson). It doesn’t matter what the gender is — the character is still appalled, not only at the possible stain on his virtue but at Angelo’s audacity and willingness to sexually bargain with blood. Preheim is terrific at conveying a mix of obsessive lust and cruelty, while Mickelson fusses beautifully between concern for this world and the judgment of the next. Myers’ taut direction gives the scene an evil and melancholy sizzle. For me, it’s a stirring example of how there are layers in Shakespeare that you might not even be aware of  until they’re presented in unconventional ways. Thank goodness for a university and a state in which those moments are allowed to happen.

Is Fresno ready for “Romeo and Julius”? 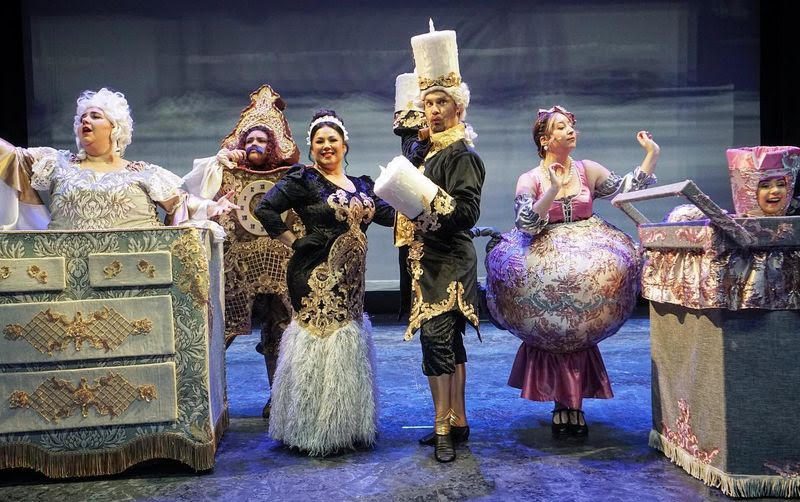