Earlier this month I was perusing a New York Times interview with Tom Hanks about his reading habits. I always eat these kinds of stories up. The reporter asked Hanks who his favorite novelists are.

There was a time early in the career of Scalzi, my friend and a former Fresno Bee colleague, when I would have been stunned to see his name bandied about by beloved actors in the national press. But I’m used to it by now. Scalzi, who preceded me as movie critic at The Bee, has had great success as a science-fiction author. He’s probably best known for his book “Old Man’s War,” which kicked off a popular series. He’s won a Hugo Award, served as president of the Science Fiction and Fantasy Writers of America, is a contributing columnist for the Los Angeles Times, and writes the widely read blog Whatever.

He was passing through Fresno last week with his wife, Krissy, and I got the chance to hang out with him for a couple of hours. What a treat!

Scalzi and I shared cramped quarters within the back room of the features department at The Bee. He’d wander in around lunchtime clutching a bag of fast food and a slightly bleary expression thanks to his late-bird hours, which made some of the other, more traditional reporters tsk-tsk in annoyance, but which I found invigorating in an anti-establishment way. We’d catch up on pop culture and astronomy and politics and obscure Japanese textile artists of the 14th century (just kidding on that last one, though his interests are and continue to be vast and wide-ranging, and once he even tried to explain quantum mechanics to me in layman’s terms, and I am not making that up.) He’s very smart.

Most of all, he was kind and funny, and even though he’s now a big-name author with big connections in Hollywood, I found him exactly the same as 20 years ago. Well, in terms of personality. We both look a few years older. But just a few.

We spent most of our time catching up on this and that, but I asked if we could do a short interview for those readers of The Munro Review who still fondly remember his time in Fresno, and perhaps even new ones who know him through his books. He graciously agreed.

Q: You are here in Fresno for the first time in how many years?

A: It’s at least 10 years. I will be here overnight, that will be the longest time I’ve spent here in 20 years.

Q: Complete this sentence: When I hear the name Fresno, I think immediately of ______.

A: I think of my wife. I met her because I worked at The Fresno Bee. I always have very positive associations with Fresno. Outside of California, people don’t know what Fresno is. Inside California, it’s kind of a butt of a joke. But I always tell people that when I was there, I had a great job, it was cheap to live there, and I met the woman who makes my life complete. I have nothing bad to say about Fresno.

Q: You actually proposed marriage to Krissy in the newspaper, which was pretty cutting-edge at the time but now seems almost old-fashioned, right? (You can tell your grandchildren one day, “I snagged Grandma by delivering my proposal on an actual piece of newsprint, which I’ll have to show you in a museum.”) Tell us about it.

A: I met Kristine when I worked at The Bee. She was pretty great. I had a column at the time when I could write about whatever I wanted, at least once a week. And I thought, I want to marry this girl. Why don’t I go ahead and propose in the newspaper column? I got clearance to do it. It’s really funny because on the morning it was published, her mom read the proposal column before she did. Her sister actually had to tackle her mom to keep her from calling. “Don’t call,” she said. “She hasn’t read it yet!”

I presented the newspaper to Krissy that morning. She said yes. She went off to work. I went to sleep because I’d had a stressful morning. I went in to work a couple of hours later. As soon as I got into work, Tom Becker — he was my editor at the time — tells me I have to write a follow-up. Apparently from the moment the phone exchange at the office opened in the morning, it was just non-stop calls: People wanted to know: What did she say?

We did a follow-up that said, indeed, she said yes.

So, yes, I proposed in a newspaper column. As I like to say, it was an intimate moment between her, me and 250,000 readers.

Q: Just think, if it had been in the digital age, that story would have gotten so many clicks. It would have gone viral.

A: Well, as you know, I wrote a piece that was one of the very first pieces to go viral. It was a piece about Newt Gingrich and giraffes. At one point I was getting 300 pieces of email a day about it. It went everywhere. Every time I see something go viral, I go, “Eh. I went viral before viral was cool.”

Q: On to culinary matters: When we worked together, you weren’t exactly known as a gourmet.

Q: In fact, I was going to ask you if there was a favorite restaurant that you had in Fresno, but did you even eat at restaurants, at least sit-down ones?

A: When you put it that way, it sounds terrible. I will tell you a story. The first year Krissy and I were going out, Valentine’s Day happened. Madeline Davidson, the food writer, said, “John, where are you taking Krissy for Valentine’s Day?”

And she just looked at me with that disappointment on her face, and she picked up the phone. There was an Italian restaurant in Fig Garden. I can’t remember what it was called. She called and said, “This is Madeline. I’m sending this poor child to you. He didn’t know he was supposed to take his girlfriend out for Valentine’s Day.”

Q: Was it The Ripe Tomato?

A: I think it was Ripe Tomato, yeah.

Q; No longer there, alas.

A: Yes, no longer there. They treated us so wonderfully. I would say that was my favorite place to eat.

Q: Now, I remember, we used to sit across from each other at work, and sometimes you would get a letter — an actual letter — from a reader, and you would sit down and handwrite a letter in return. Do you do that anymore?

A: Not handwrite, because I don’t get any letters in the mail anymore. I think it’s been years since someone actually mailed a letter to me. But I get emails all the time. I probably answer two or three fan emails a day. Usually they’re very brief. I do try to answer all of them that come in.

Q: Do you have any memory of a particular Fresno Bee reader that really irritated you or was so obnoxious that you still remember to this day?

A: I definitely remember that there was a specific guy. I can’t remember the guy’s name anymore. When I started writing my opinion column, every week he would write in and tell me what a horrible piece of liberal trash I was. It was great. It was almost like you could get out the Bingo card and see which things he would say: “Stupid liberal”? Checkmark that. “You know nothing”? Checkmark that. I never took it personally, but it got to the point where I would grade the letters on form: “Hmm, this isn’t as good as he usually writes them. I wonder if he’s OK?” Every week there was that letter. I looked forward to it.

Q: We are sitting right now at the Radisson Hotel, which is right next to the newly renamed Fulton Street. We’ve torn out the mall and laid down a street. Does that surprise you there was finally a decision made about that?

A: Knowing that the mall, even when I was here 20 years ago, was kind of dead — you might as well try something. There’s always been people saying, “What do we do about downtown?” So in one sense, any forward movement is positive. Whether it ends up being a positive, you just have to wait and see. Maybe they will finally have the downtown revival they’ve been talking about ever since I can remember, back to 1991.

Q: Give us an update on your career. To put it mildly, it’s taken off.

A: I’m primarily writing books. I have a 10-year, 13-book contract with Tor Books. I’m on book number two of that contract now. That’s going to be the sequel to my 2014 book “Lock In.” The new book is going to be called “Head On.” That’s going very well. I’m working on a video game called “Exiles of Embermark,” and that should be coming out either late this year or early next year. And then I’m doing various projects in Los Angeles. A couple of my books have been optioned, including “Collapsing Empire.” There are a couple of other things happening that I can’t talk about yet, but when they’re announced, we’ll certainly let you know.

A: Yes. Life is actually pretty good. I can’t complain. I mean I could complain, but people would tell me to shut up.

Q: Anything else you want to say to Fresno?

A: It’s actually great to be back. I have so many positive memories of this town, of working at The Bee, of you, and of so many of the people we worked with. It’s so great to come back and see friends and see how the town has advanced in 20 years. Keep at it, Fresno.

We can be thankful for Broadway, cellists, art postcards, Meg Clark and forgetting the mute button 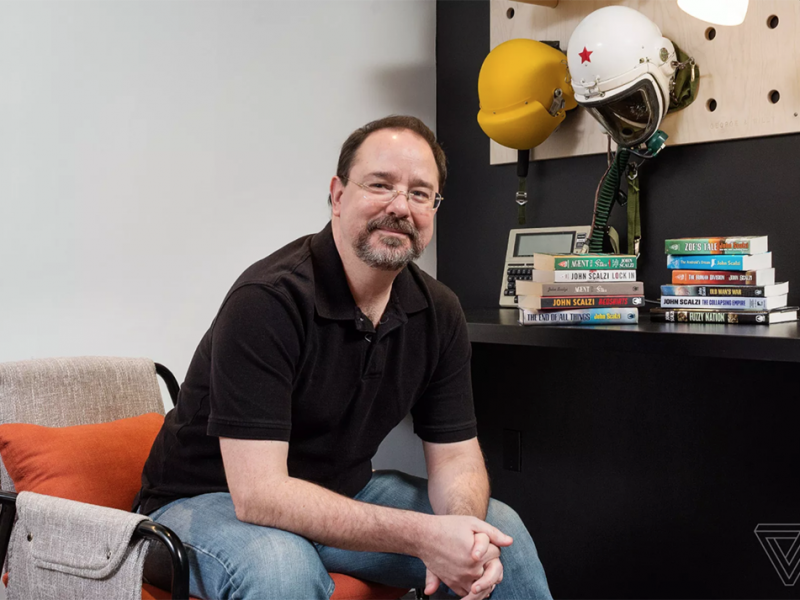 Congrats to John Scalzi, former Fresnan and best-selling author, on his latest book